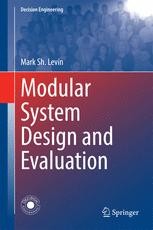 This book examines seven key combinatorial engineering frameworks (composite schemes consisting of algorithms and/or interactive procedures) for hierarchical modular (composite) systems. These frameworks are based on combinatorial optimization problems (e.g., knapsack problem, multiple choice problem, assignment problem, morphological clique problem), with the author’s version of morphological design approach – Hierarchical Morphological Multicritieria Design (HMMD) – providing a conceptual lens with which to elucidate the examples discussed. This approach is based on ordinal estimates of design alternatives for systems parts/components, however, the book also puts forward an original version of HMMD that is based on new interval multiset estimates for the design alternatives with special attention paid to the aggregation of modular solutions (system versions). The second part of ‘Modular System Design and Evaluation’ provides ten information technology case studies that enriches understanding of the design of system design, detection of system bottlenecks and system improvement, amongst others. The book is intended for researchers and scientists, students, and practitioners in many domains of information technology and engineering. The book is also designed to be used as a text for courses in system design, systems engineering and life cycle engineering at the level of undergraduate level, graduate/PhD levels, and for continuing education. The material and methods contained in this book were used over four years in Moscow Institute of Physics and Technology (State University) in the author’s faculty course “System Design”.

Mark Sh. Levin earned a MS degree in Radio Engineering from Moscow Technical University of Communications and Informatics (1970), a MS degree in Mathematics from Lomonosov Moscow State University (1975), a PhD degree in system analysis from Inst. for System Analysis of Russian Academy of Sciences (1982). Prof. David B. Yudin (optimization and applications, 1982 Fulkerson Prize) was his PhD advisor in Moscow State University (PhD program in mathematics and computers in management, 1977-1981, Faculty of Economics). In 1970-1973 Levin also studied Philosophy.

Since 1970 he was as an engineer/senior engineer/head of laboratory with several design organizations (e.g., control unit for a special multidisciplinary real-time distributed applied system, DBMSs, CAM, management systems and optimization in geology, management systems in civil engineering and architecture).

Since 1975 he conducted his research projects in combinatorial optimization (algorithms, models, applications, problem frameworks) and in 1982 he began to study multicriteria decision making, DSS-engineering and their applications in various domains.