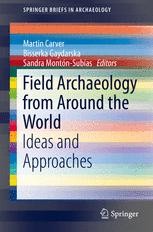 Field Archaeology from Around the World

Field practice in archaeology varies greatly throughout the world, mainly because archaeological sites survive in very different ways in different counties.  Many manuals see this as a problem - to be defeated by the imposition of standardised procedures.  In this book we relish the variety of field practice, seeing it rather as the way the best archaeologists have responded creatively to the challenges of terrain, research objectives and the communities within which they work.  While insisting on the highest levels of investigation, we celebrate the different designs, concepts, scientific detection methods and recording systems applied - so embracing standards, but not standardisation. The book is organised in four parts:

Part 2 reviews the principal methods applied, above and below ground, and how the results are analysed.

Part 3 illustrates the huge variety confronted by field workers with a series of exemplary commercial and academic projects enacted in downland, jungle, desert, permafrost, road schemes and towns.  Approaches also differ according to the traditional methodologies that have evolved in particular countries.

In Part 4 we give examples of some the strongest and oldest of those practised on four continents. ​

Martin Carver is emeritus Professor of Archaeology at the University of York (UK) and Editor of Antiquity. He is the founder of two commercial archaeology companies (FAS-Heritage and Birmingham Archaeology) and two museums (Sutton Hoo and the Tarbat Discovery Centre). He was secretary of the Institute of Field Archaeologists at its foundation and has carried out field research in England, Scotland, France, Italy and Algeria. His research interests are Field Method and the archaeology of protohistoric Europe.

Bisserka Gaydarska is a Post Doctoral Research Assistant at the Department of Archaeology in Durham University. After graduating from Sofia University, she received her PhD in Durham University, which has been fostering her research activities ever since. Apart from her homeland Bulgaria, Bisserka has been involved in various field projects and museum studies in Romania, Greece, Turkey and recently Ukraine. Her main research interests are in landscape archaeology, material culture studies, the archaeology of gender and interdisciplinary studies that combine archeological science or information technology with archaeology.

Sandra Montón-Subías is ICREA Research Professor at UPF (Universitat Pompeu Fabra), Barcelona, Spain. She is interested in broad issues in social and theoretical archaeology, including conflict, gender, identity and funerary practice. More recently, she has added historical archaeology and the archaeology of Modern Spanish colonialism to her research agenda She is co-chair of the EAA working party Archaeology and Gender in Europe.