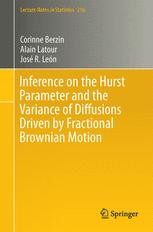 This book is devoted to a number of stochastic models that display scale invariance. It primarily focuses on three issues: probabilistic properties, statistical estimation and simulation of the processes considered.

It will be of interest to probability specialists, who will find here an uncomplicated presentation of statistics tools and to those statisticians who wants to tackle the most recent theories in probability in order to develop Central Limit Theorems in this context; both groups will also benefit from the section on simulation. Algorithms are described in great detail, with a focus on procedures that is not usually found in mathematical treatises. The models studied are fractional Brownian motions and processes that derive from them through stochastic differential equations.

Concerning the proofs of the limit theorems, the “Fourth Moment Theorem” is systematically used, as it produces rapid and helpful proofs that can serve as models for the future. Readers will also find elegant and new proofs for almost sure convergence.

The use of diffusion models driven by fractional noise has been popular for more than two decades now. This popularity is due both to the mathematics itself and to its fields of application. With regard to the latter, fractional models are useful for modeling real-life events such as value assets in financial markets, chaos in quantum physics, river flows through time, irregular images, weather events and contaminant diffusio

n problems.
Show all
About the authors

Corinne Berzin received a degree of "Agrégation de mathématiques" from Lille University, Lille, France, in 1985. She got her Ph.D. degree in 1989 from Université Paris-Sud, Orsay, France, under the supervision of D. Dacunha-Castelle and M. Wschebor. From 1990 to 1999, she was Assistant Professor at Université de Versailles Saint-Quentin-en-Yvelines, France. Since 1999, as Professor of Mathematics, she affiliated to Université de Grenoble Alpes and is a researcher of the IPS team at Laboratoire Jean-Kuntzmann (Grenoble, France). Her research interests are focused on random fields, crossings and local time, density estimation, estimation in stochastic differential equations driven by fractional Brownian motion.

Alain Latour got his Ph.D. in computer science from Université de Montréal in 1986.He started his career at Université du Québec à Montréal (UQÀM) were he was full professor at the Department of Mathematics. During many years he was responsible for the Statistics group of this department and Director of the Data Analysis Consulting Service. He definitively left Montreal for Grenoble in 2005 but is still Associated professor at UQÀM. He remains associated researcher in the Applied Stochastic Modeling Team at UQÀM. Now, he his affiliated to Université de Grenoble Alpes and researcher of the IPS team at Laboratoire Jean-Kuntzmann (Grenoble, France). He is mainly interested in estimation problems and modeling of stochastic processes and in data analysi

José R. León got his Ph.D. in 1983 under the supervision of M. Wschebor. He is full professor at Escuela de Matemática - Facultad de Ciencias, Universidad Central de Venezuela and corresponding member of the Academia de Ciencias Físicas, Matemáticas y Naturales de Venezuela. Professor Le\'on has been invited professor and researcher in many different French universities. He has many articles in international journals and reviews. He supervised several Ph.D. and Master thesis in Venezuela and France. His research interests are focused on the estimation for Gaussian processes and also on non-parametric estimation in stochastic processes.

“I can recommend it to statisticians, specialists in probability and, in general, any person interested in simulations and algorithms for fBm. The book mainly develops estimation techniques for the Hurst parameter H and the local variance or volatility of four models of stochastic differential equations (SDEs) driven by fractional noise.” (María J. Garrido-Atienza, Mathematical Reviews, August, 2015)