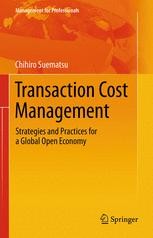 Strategies and Practices for a Global Open Economy

All organizations, institutions, business processes, markets and strategies have one aim in common: the reduction of transaction costs. This aim is pursued relentlessly in practice, and has been perceived to bring about drastic changes, especially in the recent global market and the cyber economy. This book analyzes and describes “transactions” as a model, on the basis of which organizations, institutions and business processes can be appropriately shaped. It tracks transaction costs to enable a scientific approach instead of a widely used “state-of-the-art” approach, working to bridge the gap between theory and practice.

This open access book analyzes and describes “transactions” as a model...

He continuously pursues the subjects, open standards, processes, systems, organizations, IT, and creative problem solving. He is the author of more than 12 books. Collaboration on the Internet, modularization as an application and logical thinking as a means in particular, is one of his recent research topics.

Through his first book, he became well-known by predicting and recommending structural changes, such as moving away from mainframe computers toward the open system architecture. Likewise, he also received recognition for his 2002 book regarding the significance of deploying modular structures for even Japanese companies. He is also well-known for facilitating a shift in education toward logical thinking capability development.

He has been playing active roles as a board member and an advisor of various organizations, mainly in Japan and Silicon Valley, including global companies, technology venture start-up companies, governments, and NPOs.