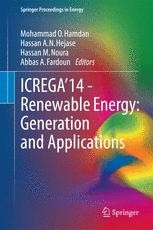 This book collects the edited and reviewed contributions presented in the 3rd International Conference on Renewable Energy: Generation and Applications” ICREGA’14, organized by the UAE University in Al-Ain. This conference aims to disseminate knowledge on methods, policies and technologies related to renewable energy and it acknowledges the leadership of the UAE which committed to a 7% renewable energy target by 2020. The demands and developments in renewable energy generations and applications are rapidly growing and are facing many challenges on different levels such as basic science, engineering system design, energy policies and sustainable developments. This edition presents new contributions related to recent renewable energy case studies, developments in biofuel, energy storage, solar and wind energy, integrated systems and sustainable power production. In the spirit of the ICREGA’14, the volume has been produced after the conference so that the authors had the possibility to incorporate comments and discussions raised during the meeting. The contributions have been grouped in the following topics: - Efficient Energy Utilization - Electrical Energy Market, Management and Economics - Energy Storage Systems - Environmental Issues - Fuel Cells Systems - Green Buildings - Intelligent Energy/Power Transmission and Distribution - Solar Photovoltaic and Thermal Energy - Wind Energy Systems.

Dr. Mohammad O. Hamdan received his B.Sc. and M.S. in Mechanical Engineering from Jordan University of Science and Technology, Jordan in 1997 and 1999 respectively. He then moved to the USA for postgraduate studies and received his Ph.D. in Mechanical Engineering from the University of Cincinnati, Ohio in 2003. After his graduation he worked for top companies in the US industry, e.g  for Honeywell International as Thermal Fatigue Analyst Engineer in Torrance, California and as a research scientist and lead engineer for General Electric Research Center in Niskayuna, New York. Currently, Dr Hamdan is working as an Associate Professor at the University of United Arab Emirates, Al-Ain, UAE.

Hassan Noura is a Professor at the United Arab Emirates University, Department of Electrical Engineering since end August 2007. His research fields of interest are mainly, control systems, fault diagnosis and fault tolerant control. He received his Master and PhD Degrees in Automatic Control from the University Henri Poincaré, Nancy 1, France in 1990 and 1993. He obtained his Habilitation to supervise Researches in Automatic Control at University Henri Poincaré, Nancy1 in March 2002. He was Associate Professor in this University from 1994 to 2003. In September 2003, he joined University Paul Cézanne, Aix-Marseille III, France as a Professor in Control Systems.

He has supervised several Master degree students and twelve PhD students (seven completed). He had participated and led research projects in collaboration with industry in the fields of fault diagnosis and fault-tolerant control. He has authored and co-authored one book, one book chapter, and over 100 journal and conference papers. He is a co-author of the Springer book “Fault Tolerant Control  Systems” (2009, ISBN 978-1-88482-652-6).

Dr. Fardoun main research area has been with energy efficient systems. Dr. Fardoun holds 7 awarded patents. He developed a new system approach for EPS that was adopted globally within the TRW community. While at UAEU, Dr. Fardoun has been coordinating a vibrant Renewable energy group. He has been very active member to the IEEE Industrial Application Society where, he organized, chaired sessions at the annual IAS meeting. He was elected as a senior IEEE member in 2005.