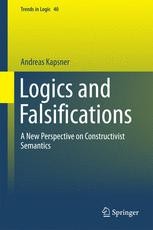 A New Perspective on Constructivist Semantics

This volume examines the concept of falsification as a central notion of semantic theories and its effects on logical laws. The point of departure is the general constructivist line of argument that Michael Dummett has offered over the last decades. From there, the author examines the ways in which falsifications can enter into a constructivist semantics, displays the full spectrum of options, and discusses the logical systems most suitable to each one of them. While the idea of introducing falsifications into the semantic account is Dummett's own, the many ways in which falsificationism departs quite radically from verificationism are here spelled out in detail for the first time.

The volume is divided into three large parts. The first part provides important background information about Dummett’s program, intuitionism and logics with gaps and gluts. The second part is devoted to the introduction of falsifications into the constructive account and shows that there is more than one way in which one can do this. The third part details the logical effects of these various moves. In the end, the book shows that the constructive path may branch in different directions: towards intuitionistic logic, dual intuitionistic logic and several variations of Nelson logics. The author argues that, on balance, the latter are the more promising routes to take.

formal logic. This is a fascinating logico-philosophical investigation, which will interest non-classical logicians of all stripes."

Andreas Kapsner is currently postdoctoral researcher at the Munich Center of Mathematical Philosophy. He received his PhD from the University of Barcelona in 2011, and his doctoral dissertation was awarded the Beth Dissertation Prize in 2012. His main research fields are the philosophy of logic and the philosophy of language, but he is also working on Asian philosophy, political philosophy and narrative theory.

“The book is nicely organized – every chapter is equipped with an introductory chapter overview and a chapter summary. This greatly facilitates reading.” (Yaroslav Shramko, zbMATH 1436.03004, 2020)

“The book presents an interesting study of phenomena which were previously rarely considered together, namely constructivism and paraconsistency. It is clearly written with many (perhaps too many) abstracts and summaries which will help one see the forest, not only the trees. It may well be of interest for students of constructivism (not limited to mathematics) and paraconsistency.” (Andrzej B. Indrzejczak, Mathematical Reviews, March, 2017)

“Andreas Kapsner’s Logics and Falsifications is unique with respect to the detail and thoroughness of its examination of the formal and philosophical dimensions of falsification. ... Kapsner’s work succeeds at providing a philosophically coherent framework robust enough to stand on its own while providing a natural and compelling elaboration on Dummettian themes. Given the recent increase in attention paid to the notion of falsification, Logics and Falsifications will undoubtedly serve as a significant resource to scholars working in these areas.” (Thomas Macaulay Ferguson, dialectica, Vol. 70 (1), March, 2016)

“Logics and Falsifications should be read by anyone interested in the connections between formal logic and the philosophy of language, and it is highly recommended to those looking for well-entrenched philosophical motivations for non-classical logics, especially when it comes to paracompleteness and paraconsistency.” (Henrique Antunes, Logic and Logical Philosophy, July, 2015)

"Shouldn't the notion of falsification be just as central to constructivist semantics as the notion of verification is? And if so: does this entail that traditional intuitionistic logic ought to be replaced by an alternative system of constructivist logic? I recommend this monograph to everyone with an interest in these questions and in semantic antirealism and paraconsistent logic more generally." (Hannes Leitgeb, Professor, Chair and Head of the Munich Center for Mathematical Philosophy, Ludwig-Maximilians-University München, March 2014)

"Verification is a concept of central importance in the last 100 years of philosophy, and has been made the corner-stone of notable formal logics, such as intuitionist logic. The dual notion of falsification has also been of central importance; but how to incorporate it into formal logic in the same way has been little investigated. The same is true of the natural thought that verification and falsification should be treated on a par with each other. Kapsner’s book is the first detailed investigation of these possibilities. It investigates the variety of techniques that may be put into play here, and discusses the pros and cons of each. This is a fascinating logico-philosophical investigation, which will interest non-classical logicians of all stripes." (Graham Priest, Distinguished Professor, Graduate Center, City University of New York, March 2014)