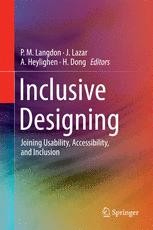 ‘Inclusive Designing’ presents the proceedings of the seventh Cambridge Workshop on Universal Access and Assistive Technology (CWUAAT '14). It represents a unique multi-disciplinary workshop for the Inclusive Design Research community where designers, computer scientists, engineers, architects, ergonomists, policymakers and user communities can exchange ideas. The research presented at CWUAAT '14 develops methods, technologies, tools and guidance that support product designers and architects to design for the widest possible population for a given range of capabilities, within a contemporary social and economic context. In the context of developing demographic changes leading to greater numbers of older people and people with disabilities, the general field of Inclusive Design Research strives to relate the capabilities of the population to the design of products. Inclusive populations of older people contain a greater variation in sensory, cognitive and physical user capabilities. These variations may be co-occurring and rapidly changing leading to a demanding design environment. Recent research developments have addressed these issues in the context of: governance and policy; daily living activities; the workplace; the built environment, Interactive Digital TV and Mobile communications. Increasingly, a need has been identified for a multidisciplinary approach that reconciles the diverse and sometimes conflicting demands of Design for Ageing and Impairment, Usability and Accessibility and Universal Access. CWUAAT provides a platform for such a need. This book is intended for researchers, postgraduates, design practitioners, clinical practitioners, and design teachers.

Dr Patrick Langdon is an experimental psychologist who has contributed to cognitive science, artificial intelligence, robotics and psychophysics. Now at the Cambridge University Engineering Design Centre his most recent research has been in Inclusive User Centred Design, interaction design, prior experience, and multimodal interface profiling from cognitive modelling. Dr Langdon was primary author and co-investigator of the successful EPSRC EQUAL “i~design 3” consortium project; “Extending Active Living Through More Effective Inclusive Design” (2006-2011), which he also managed. He was invited to join phase 2 of the (EPSRC/DST) India-UK Advanced Technology Centre, a centre of excellence for next generation network systems and services, where, with a team of recruited research associates he has built on recent success developing UI technology to support adaptive user interfaces that are accessible to the wider range of users, having impact in both the UK and India. Pat Langdon is the Author and Co-PI of five new EPSRC and Industry funded projects, all concerned with user centred design for new Human Machine Interfaces, in the application areas of Automotive, Aerospace and wireless communications in emergencies.

Jonathan Lazar is a professor of computer and information sciences, director of the undergraduate program in information systems, and founder and director of the Universal Usability Laboratory, all at Towson University. His research focuses on understanding how people with disabilities interact with technologies, how improved interface design can change the quality of life for people with disabilities, and how human-computer interaction and public policy influence each other. During the 2012-2013 academic year, Dr. Lazar was the Shutzer Fellow at the Radcliffe Institute for Advanced Study at Harvard University, researching the relationship between web-based interfaces that are inaccessible to people with disabilities, and how those inaccessible interfaces lead to forms of discrimination that are illegal under US law. Lazar has published more than 120 refereed articles in journals, books, and conference proceedings. He has also authored three books and edited three, including Research Methods in Human-Computer Interaction (Wiley, 2010), Universal Usability: Designing Computer Interfaces for Diverse User Populations (Wiley, 2007), and Web Usability: A User-Centered Design Approach (Addison Wesley, 2006). He was awarded a 2011 University System of Maryland Board of Regents Faculty Award for Public Service, a 2010 Dr. Jacob Bolotin Award from the National Federation of the Blind for working towards achieving the full integration of the blind into society on a basis of equality, and a 2009 Innovator of the Year Award from the Maryland Daily Record for his work on improving the accessibility of web-based security features. He currently serves as chair of public policy for ACM SIGCHI (the Association for Computing Machinery Special Interest Group on Computer-Human Interaction).

Ann Heylighen is a professor in the Research[x]Design group of the Department of Architecture at the University of Leuven (KU Leuven). Her main research interests are situated at the interface of design studies and social sciences. She is particularly interested in issues concerning inclusivity and is currently leading several research projects on dialogues between architectural design and disability.

Ann studied engineering/architecture at KU Leuven and ETH Zürich, and completed a PhD at KU Leuven. After conducting postdoctoral research at Harvard University and the University of California-Berkeley, she was appointed research professor in Leuven in 2006.

Hua Dong is Professor at the College of Design and Innovation, Tongji University. She had 12-year research and teaching experience in the United Kingdom (postdoctoral researcher at the University of Cambridge and Royal College of Art, and senior lecturer at Brunel University, London).

Hua has published over 100 papers, and has been a Principal Investigator for a number of research projects in the UK and China. She is directly involved in the teaching of design at both undergraduate and postgraduate levels.