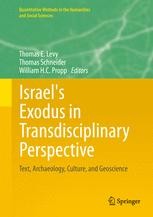 The Bible's grand narrative about Israel's Exodus from Egypt is central to Biblical religion, Jewish, Christian, and Muslim identity and the formation of the academic disciplines studying the ancient Near East. It has also been a pervasive theme in artistic and popular imagination. Israel's Exodus in Transdisciplinary Perspective is a pioneering work surveying this tradition in unprecedented breadth, combining archaeological discovery, quantitative methodology and close literary reading. Archaeologists, Egyptologists, Biblical Scholars, Computer Scientists, Geoscientists and other experts contribute their diverse approaches in a novel, transdisciplinary consideration of ancient topography, Egyptian and Near Eastern parallels to the Exodus story, the historicity of the Exodus, the interface of the Exodus question with archaeological fieldwork on emergent Israel, the formation of biblical literature, and the cultural memory of the Exodus in ancient Israel and beyond.

This edited volume contains research presented at the groundbreaking symposium "Out of Egypt: Israel’s Exodus Between Text and Memory, History and Imagination" held in 2013 at the Qualcomm Institute of the University of California, San Diego. The combination of 44 contributions by an international group of scholars from diverse disciplines makes this the first such transdisciplinary study of ancient text and history. In the original conference and with this new volume, revolutionary media, such as a 3D immersive virtual reality environment, impart innovative, Exodus-based research to a wider audience. Out of archaeology, ancient texts, science and technology emerge an up-to-date picture of the Exodus for the 21st Century and a new standard for collaborative research.

Thomas Evan Levy is Distinguished Professor and holds the Norma Kershaw Chair in the Archaeology of Ancient Israel and Neighboring Lands at the University of California, San Diego. He is a member of the Department of Anthropology and Judaic Studies Program and leads the Cyber-archaeology research group at the Qualcomm Institute, California Center of Telecommunications and Information Technology (Calit2). Elected to the American Academy of Arts and Sciences, Levy is a Levantine field archaeologist with interests in the role of technology, especially early mining and metallurgy, on social evolution from the beginnings of sedentism and the domestication of plants and animals in the Pre-Pottery Neolithic period (ca. 7500 BCE) to the rise of the first historic Levantine state level societies in the Iron Age (ca. 1200 – 500 BCE). A Fellow of the Explorers Club, Levy won the 2011 Lowell Thomas Award for “Exploring the World’s Greatest Mysteries.” Levy has been the principal investigator of many interdisciplinary archaeological field projects in Israel and Jordan that have been funded by the National Geographic Society, the National Endowment for the Humanities, National Science Foundation and other organizations. Tom also conducts ethnoarchaeological research in India. Levy, his wife Alina Levy and the Sthapathy traditional craftsmen from the village of Swamimalai co-authored the book Masters of Fire - Hereditary Bronze Casters of South India. Bochum: German Mining Museum, 2008). Tom has published 10 books and several hundred scholarly articles. Levy’s most recent book is entitled Historical Biblical Archaeology – The New Pragmatism (London: Equinox Publishers, 2010 that in 2011 won the ‘best scholarly book’ from Biblical Archaeology Society (Washington, DC). Levy and his colleague Mohammad Najjar recently won Biblical Archaeology Review’s ‘Best BAR Article’ for “Condemned to the Mines: Copper Production & Christian Persecution.”

A native New Yorker (born at Mount Sinai hospital), William H. C. Propp is the Harriet and Louis Bookheim Professor of Biblical Hebrew and Related Languages at the University of California, San Diego, where he has taught since 1983 for the Departments of Literature and History and for the Judaic Studies Program; he has also been a visiting professor of Religious Studies at Dartmouth College. His wide-ranging approach to the Hebrew Bible synthesizes philology, cultural anthropology, folklore studies, psychology, history, linguistics and literary criticism. Having published on a multitude of topics in both scholarly and popular venues, he is best known for his two-volume, 1600-page reference commentary on the Book of Exodus in the Anchor Bible series (Doubleday 1999, 2006).

“This substantial volume—in size as well as content—resulted from a 2013 conference involving more than 40 scholars from the US, Europe, and Israel as well as a ‘cyber-archeological’ museum exhibit. … Summing Up: Highly recommended. A valuable resource for faculty and graduate students in biblical studies, religion, and the history of ancient Israel.” (R. M. Seltzer, Choice, Vol. 53 (2), October, 2015)