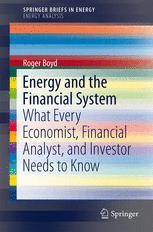 Energy and the Financial System

What Every Economist, Financial Analyst, and Investor Needs to Know

The modern financial system was developed to support the rapid economic growth that took off about 200 years ago with the phenomenal amounts of cheap energy made available through the exploitation of fossil fuels. As a result, its viability is completely dependent upon the continuation of that growth. Unfortunately, the more recent fossil fuel discoveries, especially for oil, have tended to have lower production levels than earlier ones. In addition, greater amounts of energy are required to extract the fossil fuels leading to less net energy available for society. The Energy Return On Investment (EROI) for oil has fallen from 30:1 in the 1970's to 10:1 today. Thus, newer energy finds produce lower extraction rates and more of the energy provided is offset by the energy used in the extraction processes. The result has been economic stagnation or even contraction, with growth in China and India etc. only possible due to the extensive use of local coal reserves, and recession-induced drops in OECD country energy use. Renewable sources of energy will not be able to expand fast enough to replace the 87% of energy supplies provided by fossil fuels, and apart from hydro and wind, tend to have very low EROI rates. They are also critically dependent upon the cheap energy infrastructure provided by fossil fuels. The phenomenal amounts of path-dependent energy infrastructure will also greatly inhibit any move away from fossil fuels.

Without continued economic growth there will not be the extra output to fund loan interest payments, nor the revenue and profit growth to support share price/earnings multiples. The financial system acts as a time machine, creating asset prices based upon perceptions of the future. As an increasing percentage of investors come to accept the future reality of at best, financial asset prices will fall to reflect a realistic future. The resulting crash will remove the underpinnings of the banking, brokerage, mutual fund, pension fund, and insurance industries. The comfortable futures of many will be shown to have been based upon a mirage of future growth that will not take place. With the financial system acting as the critical coordination system of the global economy, its crash will also intensify economic problems. Written by a retired financial industry executive with over 25 years of experience, this book describes how the crisis will affect different regions and industries to help identify the career and investment choices which may provide a relative safe harbour.

Roger Boyd is a retired financial industry executive, where he worked for 25 years. He received a BSc in Information Systems from Kingston University in England, an MBA in Finance from Stern School of Business, New York University in the United States, and an MA in Integrated Studies from Athabasca University in Canada. Over the past decade he has taken a deepening interest in the way in which modern societies, especially their financial systems, will deal with gobal threats such as energy constraints and climate change. He also maintains a blog covering such issues, www.humanitystest.com.