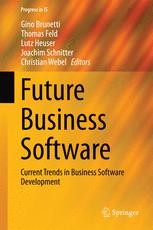 ​What will business software look like in the future? And how will it be developed?

This book covers the proceedings of the first international conference on Future Business Software – a new think tank discussing the trends in enterprise software with speakers from Europe’s most successful software companies and the leading research institutions. The articles focus on two of the most prominent trends in the field: emergent software and agile development processes.

“Emergent Software” is a new paradigm of software development that addresses the highly complex requirements of tomorrow’s business software and aims at dynamically and flexibly combining a business software solution’s different components in order to fulfill customers’ needs with a minimum of effort. Agile development processes are the response of software technology to the implementation of diverse and rapidly changing software requirements. A major focus is on the minimization of project risks, e.g. through short, iterative development cycles, test-driven development and an intensive culture of communication.

Gino Brunetti, CEO of the Software-Cluster, started his career in 1995 at the department for Industrial Applications of the Fraunhofer-Institute for Computer Graphics IGD and was its deputy head in 1998-2000 and 2003-2006. Between 2001 and 2003 he was Technical-Scientific Director of the Center for Advanced Technologies (CETA) in Porto Alegre, Brazil and from 2007 to 2009 Chief Strategy Officer of the INI-GraphicsNet, an international network of research centers in computer graphics and multimedia technologies (today GraphicsMedia.Net), before he became Cluster-Manager of the Software-Cluster. Dipl.-Inform.

Thomas Feld was born on 4. May 1968 in Saarbrücken. He studied computer science at the Saarland University and joined in 1996 the Institute for Business Information Systems (IWi) - directed by Prof. A.-W. Scheer - in 1996. As researcher and later as research group leader, he was in charge for research projects on virtual enterprises, electronic business and business process management. From 1999-2008 he served in various management positions for IDS Scheer AG. He was responsible for enterprise portal, mobile business and business-driven SOA solutions. In 2008, he took over responsibility for all research and innovation projects of IDS Scheer. By the end of 2011 he joined “Scheer Group – The Innovation Network” as vice president for research and innovation.

Dr. Joachim Schnitter studied chemistry at the University of Siegen and received his PhD from the University of Osnabrück in 1990. After three years of computer-based research in chemistry at Université Paris Sud and Technical University of Darmstadt he joined SAP AG to work in various positions in service and support, quality assurance, software development and education. From 2000 to 2007 he was development lead and later CEO of S-Tec Datenverarbeitung GmbH, Mannheim. He returned to SAP in 2006 to introduce agile and lean software development practices. In 2011 he joined SAP Research to conduct studies into development processes and lean development. He has been giving lectures on software engineering at the Hasso Plattner Institute and the DHBW Mannheim since 2008.

Professor Lutz Heuser is President of the Software-Cluster. He has been CTO of AGT International and CEO of AGT Group (R&D) from 2010 to 2012 and Vice President SAP Research and Chief Development Architect at SAP AG from 1999 to 2010. Prior to his appointment at SAP AG, he was Director of the European Research Organization at Digital Equipment Corporation. He received his doctoral degree at the Technical University of Karlsruhe and was awarded an Honorary Professorship from the Technical University of Darmstadt and Honorary PhD from the Technical University of Dresden. He is also a Visiting Professor at the National University of Paraguay and an Adjunct Professor at the Queensland University of Technology in Brisbane. He has been a member of acatech (German Academy for Technological Sciences) and the Feldafinger Circle since 2006. In the same year he also became Chairman of the IRF (International Research Forum) a high level Think Tank regarding IT trends. Between 2007 and 2010 Professor Heuser was Chairman of ISTAG (Information Society Technologies Advisory Group). His areas of expertise include Internet of Services, Internet of Things, RFID (Radio Frequency Identification) as well as the web-based service industry. He further initiated a number of research initiatives in the field of software technology for emerging economies.

Dr.-Ing. Christian Webel studied Applied Computer Science at the University of Kaiserslautern and received his PhD from there in 2009. Since 2008, he has been working at the Fraunhofer Institute for Experimental Software Engineering IESE in Kaiserslautern and has been responsible for various national and international research collaborations, including the flagship project EMERGENT of the Software Cluster. Dr. Webel’s research foci are in the area of software and systems engineering, particularly in methods for the development and assessment of software architectures as well as formal approaches for quality of service in distributed systems.