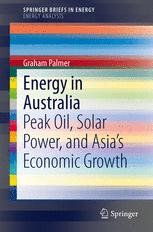 With rapidly declining costs and seemingly unlimited sunshine, the choice of solar in Australia seems obvious. Yet despite its many advantages, homes with solar remain completely dependent on the electricity grid for reliable supply, which in Australia implies mostly coal-fired generation. Indeed, even countries that have invested heavily in solar, such as Spain and Germany, have been unable to deflect the trajectory of fossil fuel dependence.

The reasons for this apparent paradox are varied, and this book provides a deeper and more nuanced understanding of the practical applications of photovoltaics (PV) in modern electricity systems. While the conventional life-cycle assessment (LCA) boundaries as prescribed by the IEA-PVPS provide a consistent methodology for comparing evolving PV technologies, the narrow boundaries exclude many critical downstream energy costs. Similarly, simple cost comparisons of PV versus conventional power sources overlook the significant economic and energy costs of intermittency and grid integration. Yet distributed storage, which could provide potentially valuable network support, is frequently given a low priority by advocates of solar.

Treating PV as an extension of, rather than as a substitute for, the fossil fuel enterprise enables a more productive discussion of PV’s potential role in electricity generation. The sunburnt country of Australia, which has a modern electricity system, is an ideal case study for exploring the potential of solar PV. With a focus on rooftop solar, energy storage, grid integration, and electricity system issues, Energy in Australia offers valuable insights into the practical challenges of solar power. Although many national economies are already confronting a downward trend in energy return on investment (EROI) of oil and gas from both conventional and unconventional sources, the large-scale deployment of low-emission energy sources that lie below a critical minimum EROI threshold may ultimately prove counter-productive.

“The reader will have an opportunity to study and understand Australia’s different energy sectors. … The book is helpful for readers interested to learn about energy development in Australia. Students eager to learn about the economics of energy productions and the environmental impacts of energy production could also benefit from this book. … the book is equipped with suitable references, which are helpful for the reader to study further in each respective topic and enhance their understanding of the concepts.” (Tunde Bello-Ochende, Yun Seng Lim and Mohammad Reza Hajmohammadi, Frontiers in Energy Research, December, 2014)