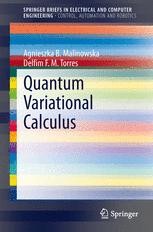 This Brief puts together two subjects, quantum and variational calculi by considering variational problems involving Hahn quantum operators. The main advantage of its results is that they are able to deal with nondifferentiable (even discontinuous) functions, which are important in applications.

Possible applications in economics are discussed. Economists model time as continuous or discrete. Although individual economic decisions are generally made at discrete time intervals, they may well be less than perfectly synchronized in ways discrete models postulate. On the other hand, the usual assumption that economic activity takes place continuously, is nothing else than a convenient abstraction that in many applications is far from reality. The Hahn quantum calculus helps to bridge the gap between the two families of models: continuous and discrete.

Quantum Variational Calculus is self-contained and unified in presentation. It provides an opportunity for an introduction to the quantum calculus of variations for experienced researchers but may be used as an advanced textbook by graduate students and even ambitious undergraduates as well. The explanations in the book are detailed to capture the interest of the curious reader, and complete to provide the necessary background material needed to go further into the subject and explore the rich research literature, motivating further research activity in the area.

Several M.Sc. dissertations, 5 Ph.D. theses, and 5 post-docs have been successfully finished under his supervision; 5 more Ph.D. theses and 3 post-docs are ongoing. Delfim F. M. Torres has written about 240 scientific and pedagogical publications, including research papers in first class international journals with referee, refereed conference proceedings, chapters in books, and books (as author and also as an editor).

Delfim F. M. Torres has 17 years of excellent teaching experience both to undergraduate and postgraduate students on Mathematics and Science and Engineering, in Portugal and abroad. He has held several positions of Invited Professor in Europe, Africa, and USA. He is a member of Scientific Committees and invited plenary speaker at several international conferences. His current research interests include several topics in the areas of the Calculus of Variations and Optimal Control, Fractional Calculus and Time Scales, and its connections with the Mathematical Theory of Control, Optimization, Epidemiology, and Mathematical Physics.