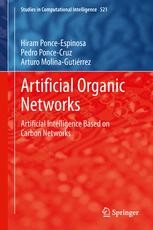 Artificial Intelligence Based on Carbon Networks

This monograph describes the synthesis and use of biologically-inspired artificial hydrocarbon networks (AHNs) for approximation models associated with machine learning and a novel computational algorithm with which to exploit them. The reader is first introduced to various kinds of algorithms designed to deal with approximation problems and then, via some conventional ideas of organic chemistry, to the creation and characterization of artificial organic networks and AHNs in particular.

The advantages of using organic networks are discussed with the rules to be followed to adapt the network to its objectives. Graph theory is used as the basis of the necessary formalism. Simulated and experimental examples of the use of fuzzy logic and genetic algorithms with organic neural networks are presented and a number of modeling problems suitable for treatment by AHNs are described:

The text finishes with a consideration of directions in which AHNs could be implemented and developed in future. A complete LabVIEW™ toolkit, downloadable from the book’s page at springer.com enables readers to design and implement organic neural networks of their own.

The novel approach to creating networks suitable for machine learning systems demonstrated in Artificial Organic Networks will be of interest to academic researchers and graduate students working in areas associated with computational intelligence, intelligent control, systems approximation and complex networks.

Professor Dr. Arturo Molina is Rector of Mexico City Metropolitan Area of Tecnologico de Monterrey. Former General Director of Campus Ciudad de Mexico, Vice president of Research and Technological Development, and Dean of the School of Engineering and Architecture of  Campus Monterrey. He was  a visiting professor at UC Berkeley at Mechanical Engineering Department during his Sabbatical year. He received his PhD degree in Manufacturing Engineering at Loughborough University of Technology, England in July 1995, his University Doctor degree in Mechanical Engineering at the Technical University of Budapest, Hungary in November 1992, his M.Sc. degree and BSc. in Computer Science from Tecnologico de Monterrey, Campus Monterrey. Professor Molina is member of the National Researchers System of Mexico (SNI-Nivel II), Mexican Academy of Sciences, Member of the IFAC Council, and member of IFIP WG5.12 Working Group on Enterprise Integration Architectures and IFIP WG 5.3 Cooperation of Virtual Enterprises and Virtual Organizations. He has offered seminars and conferences in USA, Canada, Latin America and Europe and is in the Editorial Board of the International Journal of Computer Integrated Manufacturing, Annual Reviews in Control and International Journal of Networking and Virtual Organisations. He has worked as a consultant for important Mexican corporations, World Bank, Inter-American Development Bank (IADB) and United Nations Information and Communication Technologies (ICT) Task Force. He has been Latin American coordinator of important international projects related to the development of Information Technologies such as: COSME-GVE (Cooperation of Small and Medium Enterprises - Global Virtual Enterprise), ENAPS (European Network for Advanced Performance Studies), e-HUBS (e-Engineering enabled by Holonomic and Universal Broker services) and Global e-Engineering (Global Collaborative Engineering Environment for Integrated Product Development using Internet 2). He also participated in the European Project (ECOLEAD – European Collaborative networked Organizations LEADership initiative) funded by the 6th Framework of the European Commission, and coordinated the project PYME CREATIVA (Acronym in Spanish for CREAtion of Information Technologies for Value Added Networks) sponsored by the IADB and IBM Sur Grant. Nowadays he is the principal researcher of a 7th Framework of the European Commission related to Sustainable Mass Customization – Mass Customization for Sustainability, and principal consultant of a technology transfer project to Peru of PyME CREATIVA sponsored by IADB.

He graduated from Tecnológico de Monterrey CCM, Mexico with a B.S. in Mechatronics Engineering (2008) and a Specialty in Control and Automation (2009). He also received both his Master’s Degree in Engineering Science with specialization in Intelligent Control (2010) and his Ph.D. in Computer Sciences with specialization in Artificial Intelligence (2013) from the same Institute.

He has published several research articles for both international conferences and journals, two books in the field of artificial intelligence and robotics, and he has participated in a chapter book at “LabVIEW: A Developer’s Guide to Real-World Integration” (2012). He is also co-author of six patents, including the recognized third-party software “Intelligent Control Toolkit for LabVIEW” (ICTL).

He is currently co-founder and CEO at Solarium Labs, the first Mexican research center 100% dedicated to develop intelligent systems for academy and industry. He is also professor and researcher at Tecnológico de Monterrey CCM, Mexico. His main interests are: artificial intelligence, engineering control systems, machine learning, and education.