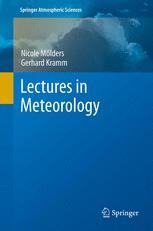 Lectures in Meteorology is a comprehensive reference book for meteorologists and environmental scientists to look up material on the thermodynamics, dynamics and chemistry of the troposphere. The lectures demonstrate how to derive/develop equations – an essential tool for model development. All chapters present applications of the material including numerical models. The lectures are written in modular form, i.e. they can be used at the undergraduate level for classes covered by the chapters or at the graduate level as a comprehensive, intensive course. The student/instructor can address chapters 2 (thermodynamics) and 4 (radiation) in any order. They can also switch the order of chapter 5 (chemistry) and 6 (dynamics). Chapter 7 (climatology and climate) requires an understanding of all chapters. Chapter 3 (cloud physics) needs basics from chapter 2 to understand the cloud microphysical processes. The governing conservation equations for trace constituents, dry air, water substances, total mass, energy, entropy and momentum are presented, including simplifications and their application in models. A brief introduction to atmospheric boundary layer processes is presented as well. Basic principles of climatology discussed include analysis methods, atmospheric waves and their analytical solutions, tropical and extra-tropical cyclones, classical and non-classical mesoscale circulations, and the global circulation. The atmospheric chemistry section encompasses photolytic and gas-phase processes, aqueous chemistry, aerosol processes, fundamentals of biogeochemical cycles and the ozone layer. Solar and terrestrial radiation; major absorber; radiation balance; radiative equilibrium; radiative-convective equilibrium; and basics of molecular, aerosol and cloud adsorption and scattering and their use in remote sensing are also presented.

Nicole Mölders earned her PhD at the University of Cologne in 1992 and her habilitation at the University of Leipzig in 1999. She uses mesoscale and climate models to investigate human and natural impacts on weather, air quality and climate with special focus on the Arctic. From 1999-2001, she was honored as a Heisenberg Fellow for Physical Hydrology, a prestigious award conferred by the DFG (German Research Foundation). After her time at NCAR (National Center for Atmospheric Research), she joined the University of Alaska Fairbanks (UAF). She has taught meteorology including cloud physics and satellite meteorology, numerical modeling and parameterization methods, mesoscale dynamics, and introduction to computational meteorology. She is Editor-in-Chief of Climate and on the advisory board for Springer Briefs in Climatic Studies.

Gerhard Kramm earned his PhD in meteorology at the Humboldt University of Berlin in 1994. At UAF, his research activities are mainly focused on the theoretical aspects of meteorology, in particular, micro-meteorology (including turbulence and its impact upon chemical processes), dynamics, radiation, and climate change. Since 2005, he has served on the editorial board of the Journal of the Calcutta Mathematical Society. He has taught atmospheric dynamics, atmospheric radiation, physics of the atmospheric boundary layer, and turbulence. In 2007, he was the lead instructor of the Science Teacher Education Program on Global Climate Change. He joined the Editorial Board of the Datasets Papers in Geosciences (Atmospheric Sciences) in 2012.