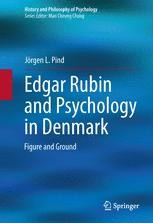 Edgar Rubin and Psychology in Denmark

​​Edgar Rubin was one of the outstanding pioneers of perceptual psychology in the early twentieth century. His approach involved a turning away from an earlier elementaristic psychology towards an approach based on “perceptual wholes.” Rubin’s approach is closely linked to the Gestalt revolution in perceptual psychology and was eagerly embraced by the Gestaltists. This has often led to Rubin being classified as a Gestalt psychologist. This misrepresents his position as is shown in the book. Rubin’s aim was to develop a descriptive psychology — or aspective psychology to use his terminology — which would do full justice to the complex nature of psychological phenomena. Thus he rejected attempts by the Gestalt psychologists to explain diverse phenomena within a single overarching framework. While Rubin is internationally often misclassified as a Gestalt psychologist, in Denmark he is often hailed as a pioneer of a specific Danish “school of phenomenology.” This also misrepresents Rubin’s approach who was highly critical of psychological “schools.” His criticisms of the overambitious theoretical aspirations of Gestalt psychology, his negative attitude towards school formation in psychology were both highly prescient. What remains today of Gestalt psychology is primarily its descriptive parts; the idea of schools of psychology, so common in early twentieth century psychology is now seen as a totally outmoded viewpoint. There is an interesting moral in this story for the history and status of psychology; to wit, that Rubin’s emphasis on the correct description of psychological phenomena shows what is likely to live on as classic contributions to psychology. This certainly holds for his own work on figure and ground which, after almost a century, is still universally known and admired by psychologists. He was indeed a consummate psychological observer. The book argues for the importance of description in psychology.​

Jörgen L. Pind is a professor of psychology at the University of Iceland. After a career in experimental psychology, he worked on the History of Psychology for the past 7-8 years, writing one book and a number of articles. He has spent two sabbatical terms at the Institute of Psychology at the University of Copenhagen, where he researched archival sources dealing with the history of psychology in Denmark, in particular relating to Rubin. He speaks and reads Danish fluently having been brought up bilingually in Danish and Icelandic. He studied in England (MSc and DPhil in Experimental Psychology, University of Sussex) and spent 1993-1994 as a visiting scientist at MIT.

"...Edgar Rubin and Psychology in Denmark: Figure and Ground is such a welcome addition to the literature. It presents material that only a writer intimately familiar with the language and customs of Denmark could present. Another reason is that it tells an important story...The author draws on a variety of sources to provide a rich portrayal of academic life in the early 20th century. The recreation of an oral examination in philosophy is spine tingling to read for those of us who have suffered through our own oral exams. Pind describes many of the difficulties facing scholars at the time, including their infighting. The competition among scholars for positions during this period in Denmark was fierce...Pind has given us a volume with a leisurely pace and a relatively narrow national focus. Readers expecting to immediately leap into the life of Edgar Rubin will have to sit back and relax. The author has a larger story to tell. He also takes many side tracks, a style that can be intriguing at the same time that it is frustrating. About Rubin himself, the story tells us that the figure–ground phenomenon, for which he was most famous, was about so much more than the figure of a vase. It became the model that infused much of Rubin’s research during a long and influential career."
John D. Hagan
PsycCRITIQUES
January 27, 2014, Vol. 59, No. 4, Article 1

"Pind’s well-researched book provides an insight into the confined world of philosophy and psychology at the University of Copenhagen in the period from the late-19th to the mid-20th century. His accounts of Rubin’s Visually Experienced Figures will broaden the appreciation of a seminal work in the history of perception for English readers."
Nicholas J Wade School of Psychology, University of Dundee, Dundee DD1 4HN, Scotland, UK
Perception, 2014, volume 43, pages 595 – 604

"The book is the product of very dedicated and persistent work with many kinds of materials (yearbooks, letters, many different kinds of text genres, interviews, etc.). This is history of science at its best, and Pind tries with success to avoid undocumented rumors and its like. The primary focus is on Rubin's scientific development and the necessary sources to describe this with. It is done in a very serious and informative way. The book will be a standard work for anyone interested in Edgar Rubin and the scientific investigation of perception."
Simo Koppe, Department of Psychology, University of Copenhagen, Denmark
Journal of the History of the Behavioral Sciences, Vol. 51(2), 231-232