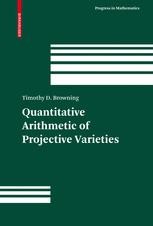 “The book under review considers the distribution of integral or rational points of bounded height on (projective) algebraic varieties. … well-written and well-organized. … Introductory material is discussed when appropriate, motivation and context are provided when necessary, and there are even small sets of exercises at the end of every chapter, making the book suitable for self or guided study … .” (Felipe Zaldivar, The Mathematical Association of America, January, 2010)

“The most important feature of the book is the way it presents the geometric and analytic aspects of the theory on a unified equal footing. The interface between these two fields has been a very productive subject in recent years, and this book is likely to be of considerable value to anyone, graduate student and up, interested in this area.” (Roger Heath-Brown, Zentralblatt MATH, Vol. 1188, 2010)

“The book … is focused on exposing how tools rooted in analytic number theory can be used to study quantitative problems in Diophantine geometry, by focusing on the Manin conjectures, the dimension growth conjecture, and the Hardy-Littlewood circle method. … book is clear, concise, and well written, and as such is highly recommended to a beginning graduate student looking for direction in pure mathematics or number theory. … includes a number of interesting and accessible exercises at the end of each of the eight chapters.”­­­ (Robert Juricevic, Mathematical Reviews, Issue 2010 i)