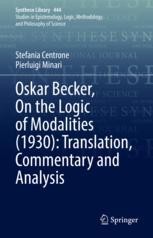 Oskar Becker, On the Logic of Modalities (1930): Translation, Commentary and Analysis

This book offers the first-ever English translation of Oskar Becker’s Zur Logik der Modalitäten. This essay, published in 1930, is a pioneering yet often neglected contribution in the context of prewar modal logic research in Europe. Becker’s text is complemented by an extended commentary that explains, analyzes and highlights Becker’s accomplishments and the philosophical background of his investigations.
The commentary provides an in-depth analysis of all of Becker's important contributions, both from a philosophical and logical perspective, making it a very useful book for scholars in both philosophy and logic.

Stefania Centrone is currently Privatdozentin at the University of Hamburg and holds a Heisenberg-Stelle at the Technical University of Berlin from October 2018. In 2012, she was awarded a DFG-Eigene Stelle for the project “Bolzanos und Husserls Weiterentwicklung von Leibnizens Ideen zur Mathesis Universalis” at the Carl-von-Ossietzky University of Oldenburg, where she remained as a research assistant until 30 September 2018. In 2016 she was deputy professor of Theoretical Philosophy at the Georg-August-Universität Göttingen. She is author, among others, of the volumes Logic and Philosophy of Mathematics in the Early Husserl (Springer 2010) and Studien zu Bolzano (Academia Verlag 2015), Oskar Becker on Modalities, with P. Minari (Logos 2019). She is editor, among others, of Versuche über Husserl (Meiner 2013), Essays on Husserl’s Logic and Philosophy of Mathematics (Springer 2017), Mathesis Universalis, Computability and Proof, with D. Sarikaya, P. Schuster and S. Negri (Springer 2019) and Reflections on the Foundations of Mathematics, with D. Kant and D. Sarikaya (Springer 2019).

Pierluigi Minari is professor of Logic at the University of Firenze and guest professor at the Collegio Ghislieri in Pavia. His main research interests include non-classical logics, structural proof theory, theories of operations (combinatory logic and lambda calculus), and the history of logic as well. He is the author of Semantic Investigations on Intermediate Propositional Logics (Bibliopolis 1989) and Introduction to Logic (with A. Cantini, Mondadori Education 2009) and of many research papers in international logic journals, among which are the Journal of Symbolic Logic, Studia Logica, and Archive for Mathematical Logic.