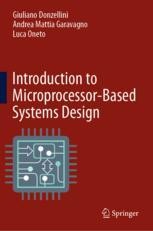 This book is intended for a first course on microprocessor-based systems design for engineering and computer science students. It starts with an introduction of the fundamental concepts, followed by a practical path that guides readers to developing a basic microprocessor example, using a step-by-step problem-solving approach. Then, a second microprocessor is presented, and readers are guided to the implementation and programming of microcomputer systems based on it. The numerous worked examples and solved exercises allow a better understanding and a more effective learning. All the examples and exercises were developed on Deeds (Digital Electronics Education and Design Suite), which is freely available online on a website developed and maintained by the authors. The discussed examples can be simulated by using Deeds and the solutions to all exercises and examples can be found on that website. Further, in the last part of this book, different microprocessor-based systems, which have been specifically thought for educational purposes, are extensively developed, simulated and implemented on FPGA-based platforms. This textbook draws on the authors’ extensive experience in teaching and developing learning materials for bachelor’s and master’s engineering courses. It can be used for self-study as well, and even independently from the simulator. Thanks to the learning-by-doing approach and the plentiful examples, no prior knowledge in computer programming is required.

Giuliano Donzellini was born in Savona (Italy) in 1954. He graduated in Electronic Engineering from the University of Genoa in 1980. After an initial experience in the Civil Telecommunications Division of the company Marconi Italiana (Genoa), he joined the DIBE (Department of Biophysical and Electronic Engineering, now DITEN, Department of Electrical, Electronic, Telecommunication Engineering and Naval Architecture) of the University of Genoa, Italy, as an Assistant Professor, where he currently serves as a Contract Professor. During his career, he has been developing automated instrumentation systems, arbitrary waveform generators, image analysis systems, and process control systems. He has also been implementing various architectures for digital phase-locked systems, object-oriented microcontroller architectures and topographic surveying techniques with VLF and ELF. More recently, he has been very active in developing hardware and software simulation of digital devices for computer-assisted and distance learning. He developed a specific software environment for teaching/learning digital electronics (the Deeds, "Digital Electronics Education and Design Suite"), including topics such as analysis and synthesis of combinational and sequential logic networks, finite state machine design, microcomputer programming, embedded systems, FPGA programming and design with the use of HDL languages. Furthermore, he has been contributing to several EU projects dealing with issues in electronic design and e-Learning.

Andrea Mattia Garavagno was born in Rome (Italy) in 1996. He received his BSc in Electronic Engineering from the University of Genova, Italy, in 2018. He is currently attending a Master Degree’s Program on Embedded Computing Systems, jointly offered by the Department of Information Engineering at the University of Pisa, Italy, and the Institute of Communication, Information and Perception Technologies at  the Scuola Superiore Sant’Anna, Italy.  Together with Giuliano Donzellini e Luca Oneto, he co-authored the Italian book "Introduzione al Progetto di Sistemi a Microprocessore", published by Springer Milano, Italy, in 2021.

Luca Oneto was born in Rapallo, Italy in 1986. He received his BSc and MSc in Electronic Engineering at the University of Genoa, Italy, in 2008 and 2010, respectively. In 2014, he received his PhD degree from the same university, at the School of Sciences and Technologies for Knowledge and Information Retrieval, with the thesis "Learning Based On Empirical Data". In 2017, he obtained the Italian National Scientific Qualifications for the role of Associate Professor in Computer Engineering and in Computer Science, in 2017 and 2018, respectively.  From 2016 to 2019, he has been serving as an Assistant Professor in Computer Engineering at University of Genoa, Italy. In 2018, he co-founded the spin-off ZenaByte s.r.l. In 2019,  he obtained the Italian National Scientific Qualification for the role of Full Professor in Computer Science and Computer Engineering. In 2019, he became Associate Professor in Computer Science at University of Pisa, Italy, and in turn Associate Professor in Computer Engineering at University of Genoa, Italy. He has been involved in several H2020 projects (S2RJU, ICT, DS), and was awarded with the Amazon AWS Machine Learning Awards (2019 and 2020), and the Marco Somalvico Award 2019 for the best Italian Young AI researcher. The main topic of Luca Oneto’s research is Statistical Learning Theory, with a particular focus on the theoretical aspects of the problems of (Semi) Supervised Model Selection and Error Estimation. Further topics are relating to Data Science, and cover the problem of Trustworthy AI and solutions of real-world problems by exploiting and improving the most recent Learning Algorithms and Theoretical Results in the fields of Machine Learning and Data Mining. He has been teaching  the courses “Logic Design” and “Machine Learning” at the University of Genoa, Italy. He has authored and edited more than hundred publications,  including a few books and book chapters, special issues, and papers in international journals and conferences.