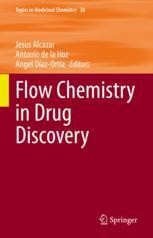 This book reviews the challenges and opportunities posed by flow chemistry in drug discovery, and offers a handy reference tool for medicinal chemists interested in the synthesis of biologically active compounds.

Prepared by expert contributors, the respective chapters cover not only fundamental methodologies and reactions, such as the application of catalysis, especially biocatalysis and organocatalysis; and non-conventional activation techniques, from photochemistry to electrochemistry; but also the development of new process windows, processes and reactions in drug synthesis. Particular attention is given to automatization and library synthesis, which are of great importance in the pharmaceutical industry. Readers will also find coverage on selected topics of general interest, such as how flow chemistry is contributing to drug discovery R&D in developing countries, and the green character of this enabling technology, for example in the production of raw materials for the pharmaceutical industry from waste.

Given its scope, the book appeals to medicinal chemistry researchers working in academia and industry alike, as well as professionals involved in scale-up and drug development.

Antonio de la Hoz is professor in Organic Chemistry in the University of Castilla-La Mancha. He obtained his Ph. D. from the Universidad Complutense in Madrid in 1986. After his postdoctoral research in 1987 with Prof. Mikael Begtrup at the Danmarks Tekniske Høskole, he joined the Faculty of Chemistry of the Universidad de Castilla-La Mancha in Ciudad Real in 1988. In 1993, he worked under the supervision Prof. André Loupy in the Université de Paris-Sud in Microwave Assisted Organic Chemistry. Prof. de la Hoz has authored over 220 scientific publications and he has been a foundation member of the Spanish Green Chemistry Network. His current research interests focus on Green methodologies, microwave activation, mechanochemistry, flow methodologies and solvent-free reactions, and the applications of heterocyclic compounds in material and supramolecular chemistry.

Ángel Díaz-Ortiz Ángel Díaz-Ortiz obtained his PhD in Chemistry from the Complutense University of Madrid (Spain) in 1988 in the field of Medicinal Chemistry. After his postdoctoral research at a pharmaceutical company (Laboratorios Alter SA), he joined the Faculty of Chemistry at the University of Castilla-La Mancha (UCLM) as an Assistant Professor, becoming Full Professor in 2010. Since 1994, he has studied, experimentally and theoretically, the application of microwave irradiation in sustainable synthetic processes in the improvement and/or modification of organic chemical reactivity. These works include the design of several microwave reactors operating at 915 or 2450 MHz. His current research interests include metal-catalyzed coupling reactions on heterocyclic compounds with application in drug discovery or materials, and flow methodologies. Pr. Díaz-Ortiz has authored over 130 scientific publications, including 14 book chapters.

Jesús Alcázar is a senior principal scientist at Janssen Research and Development. He studied in Universidad de Castilla-La Mancha in Ciudad Real where he got his bachelor degree in 1990 and Ph. D. in 1996. In 1995, he joined Janssen-Cilag at the research center in Toledo. Currently, he is involved in the implementation of novel technologies in Drug Discovery in collaboration with other J&J sites worldwide. Dr. Alcázar has led the application of Flow Chemistry in Drug Discovery at Janssen providing solution for medicinal chemistry programs within diverse therapeutic areas. He has contributed as the author of 65 articles, 6 reviews and 8 book chapters. He is inventor in 35 patent applications.