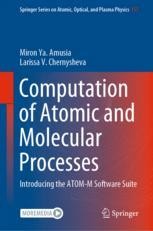 Computation of Atomic and Molecular Processes

This book presents numerical methods for solving a wide range of problems associated with the structure of atoms and simplest molecules, and their interaction with electromagnetic radiation, electrons, and other particles. It introduces the ATOM-M software package, presenting a unified software suite, written in Fortran, for carrying out precise atomic and molecular numeric calculations.

The book shows how to apply these numerical methods to obtain many different characteristics of atoms, molecules, and the various processes within which they interact. In an entirely self-sufficient approach, it teaches the reader how to use the codes provided to build atomic and molecular systems from the ground up and obtain the resulting one-electron wave functions. The computational programs presented and made available in this book allow calculations in the one-electron Hartree–Fock approximation and take into account many-electron correlations within the framework of the random-phase approximation with exchange or many-body perturbation theory.

Ideal for scholars interested in numerical computation of atomic and molecular processes, the material presented in this book is useful to both experts and novices, theorists, and experimentalists.
Show all
About the authors

Miron Ya Amusia graduated from Leningrad State University in 1958 and is doctor of physical and mathematical sciences from 1972. He is Professor of physics since 1985 and Member of the Russian Academy of Natural Sciences. Currently, he is Professor of Physics Emeritus, Racah Institute of Physics at the Hebrew University of Jerusalem, Israel, and Chief Scientific Fellow at the Ioffe Physical-Technical Institute in St. Petersburg, Russian Federation. He was Foreign Fellow of Argon National Laboratory (USA) in 1992, is Fellow of American Physical Society since 1995, and is A. Von Humboldt Prize (Germany) Recipient. He has the A. F. Ioffe Prize of RAS (2017), the Ya.I. Frenkel’s medal and Prize of the Ioffe Institute (2013), the B.P. Konstantinov’s medal and Prize of the Ioffe Institute (2001), and a number of other awards. He is Author and Co-author of 18 books, about 540 refereed publications, and about 500 abstracts of presentations, including numerous invited talks, at scientific conferences. He gave also numerous talks while visiting the best research centers and universities all over the world. He was Scientific Adviser to 25 Ph.D. students, of whom 12 became professors, and has created a well-known school in theoretical atomic physics. He was Visiting Professor in many famous research centers and universities all over the globe. Noticeable attention gives to social activity that is reflected in hundreds of articles and interviews in both conventional and electronic media.

Larissa V. Chernysheva graduated from the Ulyanov (Lenin) Electrotechnical Institute (Leningrad) in 1960. She is Doctor of Technical Sciences from 1988 and Leading Researcher at the Ioffe Institute in St. Petersburg, Russian Federation, from 1992. She is a specialist in the field of software development for studying the structure of atoms, and Author and Co-author of 8 books, more than 230 refereed publications, and about 300 abstracts at scientific conferences. She has a number of awards: the A. F. Ioffe Prize of RAS (2017), the Ya.I. Frenkel’s medal and Prize of the Ioffe Institute (2013), and the B.P. Konstantinov’s medal and Prize of the Ioffe Institute (2001).
Show all