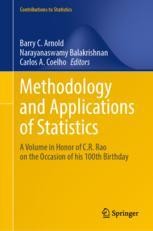 Methodology and Applications of Statistics

A Volume in Honor of C.R. Rao on the Occasion of his 100th Birthday

Dedicated to one of the most outstanding researchers in the field of statistics, this volume in honor of C.R. Rao, on the occasion of his 100th birthday, provides a bird’s-eye view of a broad spectrum of research topics, paralleling C.R. Rao’s wide-ranging research interests. The book’s contributors comprise a representative sample of the countless number of researchers whose careers have been influenced by C.R. Rao, through his work or his personal aid and advice. As such, written by experts from more than 15 countries, the book’s original and review contributions address topics including statistical inference, distribution theory, estimation theory, multivariate analysis, hypothesis testing, statistical modeling, design and sampling, shape and circular analysis, and applications. The book will appeal to statistics researchers, theoretical and applied alike, and PhD students. Happy Birthday, C.R. Rao!

Barry C. Arnold is a Distinguished Professor of Statistics at the University of California, Riverside, USA. He is a Fellow of the American Statistical Association, the American Association for the Advancement of Science and of the Institute of Mathematical Statistics, and is an Elected Member of the International Statistical Institute. His research interests include order statistics, record values, inequality measurement and ordering, conditionally specified distributions, multivariate models, and income distributions.

Narayanaswamy Balakrishnan is a Distinguished University Professor at McMaster University, Hamilton, Canada. He is a Fellow of the American Statistical Association, Fellow of the Institute of Mathematical Statistics and an Elected Member of the International Statistical Institute. His research interests include ordered data analysis, censoring methodology, univariate and multivariate distribution theory, reliability theory, and survival analysis. He has recently been awarded an Honorary Doctorate by The National University of Athens, Greece.

Carlos A. Coelho is a Full Professor of Statistics at NOVA University of Lisbon, Portugal. He holds a Ph.D. in Biostatistics from the University of Michigan and his main research focuses on developing likelihood ratio tests in multivariate analysis and obtaining their exact distributions in closed finite form, whenever possible, or developing the so-called near-exact distributions for the other cases, which are sharp asymptotic distributions that are asymptotic for all parameters involved.

Book Title
Methodology and Applications of Statistics
Book Subtitle
A Volume in Honor of C.R. Rao on the Occasion of his 100th Birthday
Editors
Series Title
Contributions to Statistics
Copyright
2021
Publisher
Springer International Publishing
Copyright Holder
The Editor(s) (if applicable) and The Author(s), under exclusive licence to Springer Nature Switzerland AG