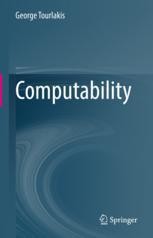 This survey of computability theory offers the techniques and tools that computer scientists (as well as mathematicians and philosophers studying the mathematical foundations of computing) need to mathematically analyze computational processes and investigate the theoretical limitations of computing. Beginning with an introduction to the mathematisation of “mechanical process” using URM programs, this textbook explains basic theory such as primitive recursive functions and predicates and sequence-coding, partial recursive functions and predicates, and loop programs.

Advanced chapters cover the Ackerman function, Tarski’s theorem on the non-representability of truth, Goedel’s incompleteness and Rosser’s incompleteness theorems, two short proofs of the incompleteness theorem that are based on Lob's deliverability conditions, Church’s thesis, the second recursion theorem and applications, a provably recursive universal function for the primitive recursive functions, Oracle computations and various classes of computable functionals, the Arithmetical hierarchy, Turing reducibility and Turing degrees and the priority method, a thorough exposition of various versions of the first recursive theorem, Blum’s complexity, Hierarchies of primitive recursive functions, and a machine-independent characterisation of Cobham's feasibly computable functions.

George Tourlakis, PHD, is University Professor of Computer Science and Engineering at York University in Toronto, Canada. He has published extensively in his areas of research interest, which include calculational logic, modal logic, computability, and complexity theory. Dr. Tourlakis is the author of Theory of Computation and Mathematical Logic, both published by Wiley, and Lectures in Logic and Set Theory; Volumes 1 and 2 (Cambridge University Press).