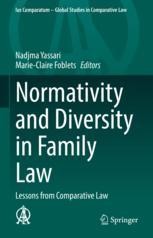 Normativity and Diversity in Family Law

With regard to family law, this volume examines claims based on cultural tradition, ethnic background, custom, religious affiliation and sexual orientation, as well as various other “claims” that are not officially recognized in state law, in 15 jurisdictions around the world.

The country reports seek to determine whether these claims represent a challenge to family law as conceived by the state, and if so, how these challenges are being managed. The focus lies on the interaction between (i) claims and traditions raising minority-related and diversity-related issues and (ii) the state as the addressee of these demands for accommodation. The reports identify specific instances and situations that have proven (and in many cases still are) particularly difficult to resolve. They force decision-makers to engage in a delicate balancing act between different, often clashing interests.

Nadjma Yassari, PD, Dr. iur., LL.M. (SOAS) is the Leader of the Research Group "Changes in God's Law - An Inner Islamic Comparison of Family and Succession Laws" at the Max Planck Institute for Comparative and International Private Law in Hamburg. Her main fields of research are national and private international law of Muslim jurisdictions, in particular the Arab Middle East, Iran, Afghanistan and Pakistan with a special focus on family and succession laws.

Marie-Claire Foblets, Lic. Iur., Lic. Phil., Ph.D. Anthrop. (Belgium) is professor of Law at the University of Leuven (Louvain in Belgium) and since 2012 also Director of the Department of ‘Law & Anthropology’ at the Max Planck Institute for Social Anthropology in Halle/Saale (Germany). She has conducted extensive research and published widely on issues of migration law, including the elaboration of European migration law after the Treaty of Amsterdam, citizenship/nationality laws, compulsory integration, anti-racism and non-discrimination, etc. In the field of anthropology of law, her research focuses on cultural diversity and legal practice, with a particular interest in the application of Islamic family law in Europe, and more recently in the accommodation of cultural and religious diversity under State law.