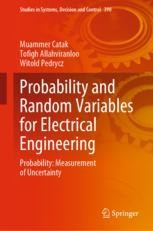 Muammer Catak, Ph.D., is working in College of Engineering and Technology, American University of the Middle East, Kuwait.

Muammer Catak is Faculty Member of Electrical Engineering Department at College of Engineering and Technology, American University of the Middle East, Kuwait. He received his B.Sc. in Electrical and Electronics Engineering from the Middle East Technical University, Turkey in 2004, the M.Sc. in Telecommunication and Signal Processing, Blekinge Technical Institute, Sweden in 2006, the Ph.D. in Stochastic Modelling and Simulation from Process Engineering, University College Cork, Ireland in 2010.  He got his Associate Professorship degree in the subject of Signal Processing / Electrical and Electronics Engineering, Turkey in 2017.

Tofigh Allahviranloo is Full Professor of applied mathematics at Bahcesehir University, Turkey. As a trained mathematician and computer scientist, Prof. Allahviranloo has developed a passion for multi- and interdisciplinary research.

He is not only deeply involved in fundamental research in fuzzy applied mathematics, especially fuzzy differential equations, but he also aims at innovative applications in the applied biological sciences. He is Author of several books and many papers published by Elsevier and Springer. He actively serves the research community, as Editor-in-Chief of the International J. of Industrial Mathematics and Associate Editor of editorial board of several other journals, including Information Sciences, Fuzzy Sets and Systems, Journal of Intelligent and Fuzzy Systems, Iranian J. of Fuzzy systems, and Mathematical Sciences.

Witold Pedrycz, Ph.D., is working in Department of Electrical and Computer Engineering, University of Alberta, Canada.

Witold Pedrycz (IEEE Fellow, 1998) is Professor and Canada Research Chair (CRC) in Computational Intelligence in the Department of Electrical and Computer Engineering, University of Alberta, Edmonton, Canada. In 2012, he was elected as Fellow of the Royal Society of Canada.