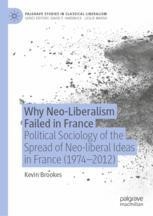 Why Neo-Liberalism Failed in France

This book fills a gap in the literature on economic liberalism in France as it strives to resolve a paradox. How do we reconcile the fact that while France has been among the most fertile of soils for the liberal intellectual tradition, the theoretical ideas it has produced has little impact on its own public debate and public policies?

Using a wide range of data on public policies, it demonstrates that neo-liberal thought has had far less influence in France than in other European nations during the period from 1974 to 2012. The failure of neo-liberalism to propagate in public policies France is shown to be mainly due to the strong resistance of public opinion towards it. In addition, the structure of French institutions has reinforced the effect of "path dependence" in the making of public policy by valuing state expertise above that of actors likely to question the post-war consensus, such as academics and think tanks. Finally, the book identifies other more incidental factors which contributed to neo-liberalism marginality: the fragmentation and radicalism of neo-liberal advocates, as well as the absence of charismatic political actors to effectively embody these ideas.

This book is a useful educational tool for students of economics, sociology, political science, and of French political history. This book is also of interest for journalists, think tank researchers and professionals of politics and administration.

Kevin Brookes is a political scientist and an associate researcher at the social sciences department of Grenoble Alpes University (PACTE). He holds a PhD in political science and has taught in various universities in Canada and in France. His research interests include the history of neo-liberal thought, the interaction between ideas and public policies, and public opinion.

“For a brief period, from the mid 1980s to the mid 1990s, it looked as if France was turning its back from the dirigisme of earlier decades and adopting a more (classically) liberal outlook on economic and global affairs. (Progressive “liberalism” in the American sense has no meaning in the French cultural context.). But the wind turned, and as Kevin Brookes brilliantly demonstrates with a wealth of data, public opinion shifted. Whether one considers opinion polls, voting patterns or public policy, French exceptionalism in the 21st century stands out: no other country in the Western world has proved more hostile to (neo)liberalism than France, even though many politicians and public intellectuals continue to insist that (neo)liberalism has won the day. Brookes very cogently analyzes the convergence of many other (historical, structural, etc.) factors besides public opinion to write an excellent book that should be of interest not only to students of French politics but also political economy and the history of ideas”.

"One of the greatest mysteries in the political sociology of France is the absence of a strong liberal party in a country that generated the 1789 revolution, human rights and numerous authors central to the classical liberal tradition, including Jean-Baptiste Say and Frédéric Bastiat. Kevin Brookes lifts the veil on this question using surveys, interviews, statistical series and an original theoretical framework. Liberalism is weak in France due to the high justification costs that attend a multitude of institutional factors (such as the status of the senior administration in the construction of public policy choices and the ideological biases induced by the public funding of social science research) as well as to the failure of Jacques Chirac in the 1988 presidential election. To understand the French status quo and the country’s inability to reform itself, this book is a must-read."