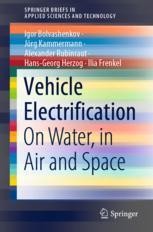 On Water, in Air and Space

This book provides a comprehensive assessment and presentation of various feasible application of electric propulsion system, considering their weight, volume, reliability, and fault tolerance. The results of feasibility analysis can be used today or in the near future for development of electric propulsion system for the ships, planes, helicopters, and spacecrafts. To solve the above task, new theoretical approaches are applied, including combined random process methods, the Lz-transform technique for multistate systems, and statistical data processing.

He specializes in the development and simulation of electric propulsion system for ships, cars, trains and aircrafts and comprehensive analysis of their efficiency, reliability, and fault tolerance. He has published four books, more than 150 scientific articles, chapters, and patents.

Jörg Kammermann, Dr.-Ing., received his diploma (Dipl.-Ing.) in Electrical Engineering and Information Technology in 2011, as well as his doctoral degree (Dr.-Ing.) in Electrical and Computer Engineering in 2019, from Technical University of Munich (TUM) in Germany. From 2011 to 2016, he was research associate and since 2016, he is academic counselor with the Institute of Energy Conversion Technology at TUM.

Alexander Rubinraut, Dr.-Ing. Habil, is General Manager in the Design Office “Expplanet”, (Munich, Germany). Graduated from The Moscow Energetic Institute in 1955, he received a PhD degree in 1967, habilitated in 1989, in Electrical Engineering and Energetics. During 20 years was the head of Special problem laboratory at the Moscow Research Institute of Electrical Engineering, where electrical motors and generators, operating based on effect of superconductivity have been created. He is the author of  the book ”Cryogenic electrical motors“ and two monographs. He has published more than 100 scientific works and invention patents.

His main research interests are energy efficiency of hybrid electric and full electric vehicles, electric aircraft, reliability of drive trains and their components, energy and power management, and advanced design methods for electrical machines. He is a Senior Member of IEEE and Member of VDI as well as VDE.

He obtained his M.Sc. degree in Applied Mathematics from Voronezh State University, Russia, and Ph.D. degree in Operational Research and Computer Science from the Institute of Economy, Ukrainian Academy of Science, Kiev, Ukraine. He has more than 45 years of academic experience and teaching experience at universities and institutions in Russia and Israel. From 1988 till 1991, he worked as Department Chair and Associate Professor at the Applied Mathematics and Computers Department, Volgograd Civil Engineering Institute, Russia. From 2001 till 2018, he served as Senior Lecturer at the Industrial Engineering and Management Department and from 2005 as Chair in the Center for Reliability and Risk Management in Shamoon College of Engineering (SCE), Beer Sheba and Ashdod, Israel.

He specializes in applied statistics and reliability with application to preventive maintenance. He is an editor and a member of the editorial board of scientific and professional journals.
He published five books and more than 100 scientific articles and chapters. He has edited 5 books and 12 special journal issues and organized several international conferences in Israel and China.