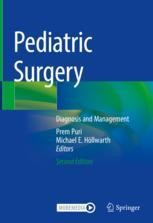 This comprehensive book provides detailed practical advice on the diagnosis and surgical management of congenital and acquired conditions in infants and children. Following the great success of the first edition, the new edition has been fully updated to reflect the major developments in the field of the past decade. Advances in prenatal diagnosis, imaging, anaesthesia and intensive care as well as the introduction of new surgical techniques, including minimally invasive surgery and robotic technology that have radically altered surgical conditions are now discussed in the book. In addition new chapters have been added on surgical safety in children, surgical problems of children with disabilities and surgical implications of HIV infection in children among others.

This is a superbly structured and richly illustrated guide aimed at trainees, young paediatric surgeons & general surgeons with interest in paediatric surgery. The book also serves as a handy, quick and easy reference for those making decisions in daily practice.

"Pediatric Surgery, Diagnosis and Management" features contributions by leading experts in pediatric surgery and pediatric urology who have unique experience in their respective fields.

Professor Puri is known internationally for his research into underlying mechanisms causing birth defects, and innovative treatments, which have benefited children all over the world. He is a multi award-winning researcher whose previous awards include People of the Year Award (Highest Irish National Award), the prestigious Denis Browne Gold Medal by the British Association of Paediatric Surgeons and Rehbein Medal by the European Paediatric Surgeons Association for outstanding contribution to paediatric surgery. He has been a visiting professor to many leading universities all over the world, and invited speaker at over 250 international scientific meetings. He has published 10 books, 147 chapters in textbooks and over 700 articles in peer-reviewed journals.  He is the Editor of Newborn Surgery regarded as the authoritative book in the field, and the 4th edition is now published, and also of the widely acclaimed Pediatric Surgery (Atlas Series) which is in its 2nd edition. His research has been cited over 20,000 times in peer-reviewed articles.