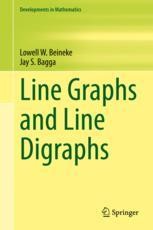 In the present era dominated by computers, graph theory has come into its own as an area of mathematics, prominent for both its theory and its applications. One of the richest and most studied types of graph structures is that of the line graph, where the focus is more on the edges of a graph than on the vertices.

A subject worthy of exploration in itself, line graphs are closely connected to other areas of mathematics and computer science. This book is unique in its extensive coverage of many areas of graph theory applicable to line graphs. The book has three parts. Part I covers line graphs and their properties, while Part II looks at features that apply specifically to directed graphs, and Part III presents generalizations and variations of both line graphs and line digraphs.

Line Graphs and Line Digraphs is the first comprehensive monograph on the topic. With minimal prerequisites, the book is accessible to most mathematicians and computer scientists who have had an introduction graph theory, and will be a valuable reference for researchers working in graph theory and related fields.

Lowell Beineke is the Schrey Professor Emeritus of Mathematics at Purdue University, having retired in 2020 after more than a half-century at Purdue University Fort Wayne, Indiana. He received his baccalaureate degree from Purdue University and his doctorate from the University of Michigan. His mathematical research has been in the field of graph theory, in which he has been author of more than a hundred papers and a co-editor of ten books on topics in graph theory. He also served for five years as Editor of The College Mathematics Journal. His interests in graph theory are broad. In addition to line graphs and line digraphs, they include the thickness of graphs, crossing numbers, tournaments, graph decompositions, graph labeling, and multi-dimensional trees. His various honors include being entered into Purdue University’s Book of Great Teachers, the Beineke award established at Purdue University Fort Wayne, being a recipient of the Meritorious Service award from the Mathematical Association of America, having a special issue of the AKCE International Journal of Graph and Combinatorics devoted to his work, and being listed in Who’s Who in America.

Jay Bagga has been a Professor of Computer Science at Ball State University since 1992. He received his baccalaureate degree from University of Mumbai and his doctorate from Purdue University. His areas of research interest include graph theory, graph algorithms and their applications to computer science. He has co-edited special issues of graph theory journals and proceedings, and has published over sixty papers in line graphs and line digraphs, tournaments, graceful labelling and algorithms, Hamiltonian graphs, vulnerability parameters of graphs, and applications to bioinformatics and other related areas in computer science. His research has been funded by, among others, the U. S. Office of Naval Research, and the U. S. Department of State. His various honors include a Senior Fulbright Award, U. S. Vietnam Educational Foundation Faculty Scholar Award, Midwest Graph Theory Conference Harary Plenary Lecture Speaker, and Ball State University Outstanding Faculty and Researcher of the Year Awards.