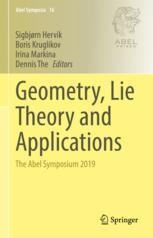 This book consists of contributions from the participants of the Abel Symposium 2019 held in Ålesund, Norway. It was centered about applications of the ideas of symmetry and invariance, including equivalence and deformation theory of geometric structures, classification of differential invariants and invariant differential operators, integrability analysis of equations of mathematical physics, progress in parabolic geometry and mathematical aspects of general relativity.
The chapters are written by leading international researchers, and consist of both survey and research articles. The book gives the reader an insight into the current research in differential geometry and Lie theory, as well as applications of these topics, in particular to general relativity and string theory.

Sigbjørn Hervik is a professor of mathematics at the Department of Mathematics and Physics at the University of Stavanger, Norway. His areas of research are general relativity, differential geometry, Lie theory, invariant theory and applications of these. In particular, he has been working on classification of pseudo-Riemannian spaces using their polynomial curvature invariants, and significantly contributed to understanding when such invariants can be used to distinguish spaces. He is a co-author of the book Einstein’s General Theory of Relativity, also published by Springer.

Boris Kruglikov is a professor in mathematics at the Department of Mathematics and Statistics at UiT the Arctic University of Norway, and professor II at the University of Stavanger, Norway. His research is on intersection of differential geometry, Lie theory and mathematical physics. This includes very general geometries like projective and conformal, almost complex and vector distributions, obtained by (possibly higher order) reductions and (possibly nonholonomic) constraints. The basic questions deal with symmetry algebras and Lie pseudogroups, integrability properties of differential equations and differential invariants of geometric structures.

Irina Markina is a professor of mathematics at the Department of Mathematics at the University of Bergen, Norway. Her areas of interest belong to differential geometry, real analysis, and partial differential equations. The focus of research is sub-Riemannian geometry and closely related theory of hypo-elliptic and sub-elliptic partial differential equations, which play a role analogous to that of elliptic operators on Riemannian manifolds. She also published results in the fields of integrable systems, Lie groups and Lie algebras, as well as non-linear potential theory and quasi-conformal analysis.

Dennis The is an associate professor of mathematics at the Department of Mathematics and Statistics at UiT the Arctic University of Norway. His research interests lie at the intersection of differential geometry and representation theory, and are strongly influenced by ideas from Lie theory, Cartan geometry, and Tanaka theory. He focuses on equivalence and symmetry for numerous geometric structures, in particular those arising in the context of parabolic geometries (e.g. conformal, CR, vector distributions) and the geometry of differential equations.