Birkhäuser History of Mathematical Sciences
Trends in the History of Science 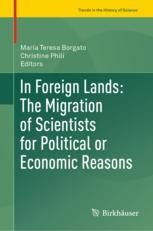 In Foreign Lands: The Migration of Scientists for Political or Economic Reasons

This proceedings volume collects the stories of mathematicians and scientists who have spent and developed parts of their careers and life in countries other than those of their origin. The reasons may have been different in different periods but were often driven by political or economic circumstances: The lack of suitable employment opportunities in their home countries, adverse political systems, and wars have led to the emigration of scientists. The volume shows that these movements have played an important role in spreading scientific knowledge and have often changed the scientific landscape, tradition and future of studies and research fields.

The book analyses in particular: aspects of Euler’s, Lagrange’s and Boscovich’s scientific biographies, migrations of scientists from France, Spain and Greece to Russia in the eighteenth and nineteenth centuries, and from Russia to France in the twentieth century, exiles from Italy before the Italian Risorgimento, migrations inside Europe and the escape of mathematicians from Nazi-fascist Europe, between the two World Wars, as well as the mobility of experts around the world.

It includes selected contributions from the symposium In Foreign Lands: The Migration of Scientists for Political or Economic Reasons held at the Conference of the International Academy of the History of Science in Athens (September 2019).

Book Title
In Foreign Lands: The Migration of Scientists for Political or Economic Reasons
Editors
Series Title
Trends in the History of Science
Copyright
2022
Publisher
Birkhäuser Basel
Copyright Holder
The Editor(s) (if applicable) and The Author(s), under exclusive license to Springer Nature Switzerland AG