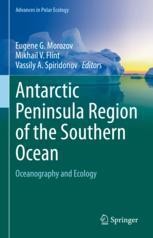 The book is based on results from the Russian expedition in the region of the Antarctic Peninsula and Powell Basin in the northern part of the Weddell Sea, as well as on the review of earlier research in the region. The main goal of the research was to collect the newest data and study the physical properties and ecology of this key region of the Southern Ocean. Data analysis is supplemented with numerical modeling of the atmosphere-ocean interaction and circulation in the adjacent region, including research on rogue waves.

The focus of the study was the Antarctic Circumpolar Current, currents and water properties in the Bransfield Strait and Antarctic Sound, properties of seawater, currents, ecosystem and biological communities in the Powell Basin of the northwestern Weddell Sea, and their variations.

Mikhail V. Flint is a specialist in marine ecology, Doctor of Biological Science, and a member of the Russian Academy of Sciences. He graduated from the Lomonosov Moscow State University in 1972 and since then have been affiliated with the Shirshov Institute of Oceanology, Russian Academy of Sciences. The main fields of research interest are marine zoo- and phytoplankton, plankton population ecology, biological productivity, physical-biological interactions in marine ecosystems, role of mesoscale processes in pelagic ecosystems functioning, and marine ecosystems conservation. Beginning from 2007 till now is a head of long-term research program “Ecosystems of Siberian Arctic Seas”, in the frame of which 14 expeditions to the Kara, Laptev, and East-Siberian seas have been performed.

Vassily Spiridonov (1957-2020) was a renowned Russian scholar of carcinology, marine ecology and conservation. He graduated from the Lomonosov Moscow University in 1980 and then worked at the Antarctic laboratory of the All-Union Research Institute of Fishery and Oceanography (VNIRO) in Moscow. During his numerous expeditions to the Antarctic, he studied the biology and ecology of krill, which resulted in his PhD dissertation “The biology of krill distribution in the vicinity of the Antarctic Peninsula” in 1988.