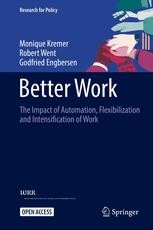 The Impact of Automation, Flexibilization and Intensification of Work

This Open Access book provides a thorough analysis of the quality of work in the Netherlands, and suggests policy proposals to promote and facilitate good work for more people. New technology, flexibilization and the intensification of work will have significant consequences for all those who will still have jobs in the future, and – much less studied so far – for the quality of their work. Good work is essential for general well-being: for the individual’s quality of life, for the economy and for society. Good work for everyone should therefore be seen as an important aspiration for companies, institutions, social partners and governments. An essential read for an international audience of academics in the field of the sociology of work, labor economics and social policy, as well as for policymakers and researchers of trade unions, and representatives of other social movements.

Monique Kremer is a professor of active citizenship, department of sociology, University of Amsterdam, chair of the migration advisory board, and was previously employed at the WRR. She has published numerous books on a variety of topics, such as How welfare states care (2007, Amsterdam University Press), People, Policy and the New Pofessional (2006) and Vreemden in de verzorgingsstaat (2016, Strangers in the Welfare Sttate).

Robert Went (1955) works at the WRR since 2007. He has attained a doctorate in economics with a dissertation on globalization (Routledge 2002). Before he joined the WRR, he has worked among others at the Dutch court of audit (Algemene Rekenkamer) as a project manager. He has written a lot about economic issues for the general public, and is very active on twitter (@went1955). He is also a member of the board of Rethinking Economics in The Netherlands.

Godfried Engbersen, is a professor of sociology at Erasmus University Rotterdam and a council member of the WRR. Key themes in his research are social inequality and international migration. He published numerous books, among which (with others) A Continent Moving West: EU Enlargement and Labour Migration from Central and Eastern Europe (Amsterdam University Press 2010); Beyond Networks. Feedback in International Migration (Palgrave 2016), and Cultures of Unemployment (Routledge 2019).