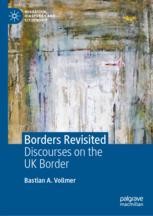 Discourses on the UK Border

The nature and configuration of borders, and the relationship between state borders and societies, have changed. In the 21st century, internationalism, transnationalism, and super-diversity have further provoked complexities and anxieties. It seems that as border and migration regimes undergo dramatic transformations, their public profile increases.

This book revisits borders, bordering practices, and meanings, with a particular focus on the United Kingdom as a case study. Bastian A. Vollmer examines not only the theoretical and historical dimensions of borders but also various empirical data, including extensive text corpora and dozens of in-depth interviews. Expanding on the concept of vernacular security—that is, an everyday understanding of security—he argues that the existential value of borders is not merely physical, but extends into the order and future construction of states and societies.

This book demonstrates decisively that the concept of the border has not left the centre stage of philosophy, political theory, and political sociology, but has instead emerged as a focal point for multidisciplinary engagements. It further demonstrates how attention to a vernacular perspective can inform those engagements, yielding vital insights. As such, it should appeal to students and scholars across disciplines interested in the contemporary development and relevance of borders and their discursive cultures.

Bastian A. Vollmer is Professor of Social Sciences at the Catholic University of Applied Sciences in Mainz, Germany. Previously, he was a Fellow at the University of Oxford. He is author and co-editor of several books and special issues, and he has published in journals such as Political Geography, Mobilities, Geopolitics and Environment and Planning D: Society and Space. He is co-editor of the journal Migration Studies and an elected Fellow of the Royal Society of Arts.

“Borders Revisited by Bastian A. Vollmer is a must-read for all scholars, students, and concerned citizens interested in border studies and contemporary questions on migration. The original empirical insights and rigorous historical and theoretical analysis on bordering and othering practices in and by the EU, and the UK, present a compelling framework to rethink our understanding of borders. This is an important and timely book."— Henk van Houtum, Professor Geopolitics and Political Geography, and Head of the Nijmegen Centre for Border Research, Radboud University, The Netherlands


"Border research has become one of the most widespread interdisciplinary research areas in social sciences and humanities. Bastian A. Vollmer has written a concise and original contribution to the ongoing debates on what borders are and do, demonstrating convincingly that borders, migration, fear, and othering have to be reflected critically together. The author’s people-centric approach, his focus on the public sphere and on vernacular security, and his rich and extensive empirical materials, are relevant not only to the UK and Brexit, but also to other contexts. Vollmer combines these materials with a sophisticated and jargon-free historical analysis and conceptual discussion that provide the reader with a very thought-provoking and insightful read on borders, security, and identity. I recommend this book highly not only to border and migration scholars but also to politicians and administrators dealing with ever more violent borders."
— Anssi Paasi, Professor of Human Geography, University of Oulu, Finland