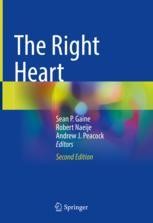 This heavily revised second edition of this critical book details the structure, function and imaging of the normal right heart both at rest and under the stresses of high altitude and exercise. Extensively revised chapters cover the pathophysiology and pathobiology of right heart dysfunction, both in experimental models and human disease, including congenital heart disease and pulmonary hypertension.

The Right Heart provides a concise up-to-date guide on the latest advances in our understanding of role of the right heart in the cardiopulmonary circuit and is an indispensable up-to-date resource for clinicians interested in this topic.

Prof. Sean Gaine is a Consultant Respiratory Physician at Mater Misericordiae University Hospital in Dublin and director of the National Pulmonary Hypertension Unit. Prof Gaine completed his medical education at Trinity College Dublin and his medical residency and fellowship training at the Johns Hopkins Hospital, Baltimore. During his Pulmonary and Critical Care fellowship Prof Gaine obtained his PhD for work exploring the control of pulmonary vasculature function. He subsequently held faculty positions at the Johns Hopkins Hospital and at the University Of Maryland School Of Medicine. He established the Pulmonary Hypertension Center at the Johns Hopkins Hospital in 1999 and subsequently the National Pulmonary Hypertension Unit upon his return to Dublin. Prof Gaine has been a working member of the European Society of Cardiology and European Respiratory Society guidelines committee on Pulmonary Hypertension in the past and an active participant and task force member of the WHO World PH symposiums since 1998. Professor Gaine is a member of numerous international associations and is a Fellow of the College of Chest Physicians, the Royal College of Physicians in Ireland and the Faculty of Sports and Exercise Medicine. He was Chief Medical Officer of the Olympic Council of Ireland and led the medical team at the Olympic Games in Athens, Beijing, London and Rio.
Robert Naeije, MD, PhD is Professor emeritus at the Free University of Brussels (Université Libre de Bruxelles, ULB), Brussels, Belgium Dr Naeije got his MD in 1973 and specialized in Internal Medicine. From 1978 to 1996 Dr Naeije was active as a critical care physician. In 1996, he took the Chair of Pathophysiology at the Faculty of Medicine of the ULB and founded a Pulmonary Hypertension Clinic at the Erasme University Hospital in Brussels.Dr Naeije has published extensively about the pulmonary circulation, gas exchange, right ventricular function and exercise, with a total of 55 chapters in books and over 500 original research, editorials and review papers  covering a range of topics, from cell and molecular biological aspects, mathematical modeling, integrative physiology and clinical studies.Dr Naeije has served as vice-president of the French Society of Intensive Care (1981-3), secretary of the working group on the Right Ventricle of the European Society of Cardiology in the 1980’s and was Chairman of the Pulmonary Circulation group of the European Respiratory Society in the 1990’s. He has been member of the editorial board of the American Journal of Respiratory and Critical Care Medicine, and is currently Associate Editor at the European Respiratory Journal.Dr Naeije has participated actively to the World Symposiums on Pulmonary Hypertension held successively in 1998 (Evian), 2003 (Venice), 1998 (Dana Point) and in 2013 and 2018 (Nice).
Andrew J. Peacock, BSc, MPhil, MD, FRCP, is Honorary Consultant physician  at  the Scottish Pulmonary Vascular Unit, Glasgow which he founded in 1991 and directed until 2018. He is also Honorary Professor in Medicine at the University of Glasgow. He studied at St Bartholomews Hospital Medical college London and Caius College Cambridge and worked in London,  Cambridge Oxford and Southampton . He was a fellow at the Cardiovascular Pulmonary Research Laboratory, Denver, under the late Jack Reeves. Andrew Peacock is a specialist in altitude medicine and pulmonary hypertension He has published many papers, chapters  and reviews on pulmonary hypertension and right ventricular function as well as another book (Pulmonary Circulation: Diseases and their Treatment, 4th Edition, with Robert Naeije and Lewis Rubin .Dr Peacock has served on the faculty of the World Symposium of Pulmonary Hypertension in 2003(Venice), 1998 (Dana Point) and in 2013 and 2018 (Nice) and has been Chairman of both the UK PH Physicians and the European Respiratory Society PH group who awarded him their lifetime achievement award.
Outside of clinical medicine he was a medical officer for the 1993 British 40th anniversary Everest expedition and Clinical and Research Director for the British Lung Foundation 2018-9.