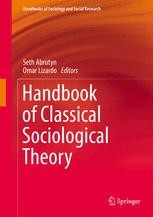 This is the first handbook focussing on classical social theory. It offers extensive discussions of debates, arguments, and discussions in classical theory and how they have informed contemporary sociological theory. The book pushes against the conventional classical theory pedagogy, which often focused on single theorists and their contributions, and looks at isolating themes capturing the essence of the interest of classical theorists that seem to have relevance to modern research questions and theoretical traditions. This book presents new approaches to thinking about theory in relationship to sociological methods.

Seth Abrutyn is an Associate Professor in the Department of Sociology at the University of British Columbia. Abrutyn’s work focuses on the interplay between institutional structure, bounded social spaces like schools or communities, and social emotions and behaviour. He has published on a diverse array of topics including suicide, social psychology, religious evolution, and more general topics of contemporary and classical sociological theory. His work can be found in venues such as American Sociological Review, Sociological Theory, American Journal of Public Health, and Journal of Health and Social Behavior.

Omar Lizardo is a Professor of Sociology at the University of California, Los Angeles. His research deals with various topics at the intersection of cultural sociology, stratification, social theory and the theory of action. He has published widely the classical and contemporary social theory, network analysis, the sociology of taste, cultural capital theory, and processes of distinction and symbolic exclusion. His work has appeared in such venues as American Sociological Review, Theory and Society, Sociological Science, Socius, Sociological Theory, and Social Forces.
Show all