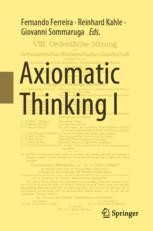 In this two-volume compilation of articles, leading researchers reevaluate the success of Hilbert's axiomatic method, which not only laid the foundations for our understanding of modern mathematics, but also found applications in physics, computer science and elsewhere.

The title takes its name from David Hilbert's seminal talk Axiomatisches Denken, given at a meeting of the Swiss Mathematical Society in Zurich in 1917. This marked the beginning of Hilbert's return to his foundational studies, which ultimately resulted in the establishment of proof theory as a new branch in the emerging field of mathematical logic. Hilbert also used the opportunity to bring Paul Bernays back to Göttingen as his main collaborator in foundational studies in the years to come.

The contributions are addressed to mathematical and philosophical logicians, but also to philosophers of science as well as physicists and computer scientists with an interest in foundations.

Fernando Ferreira is Professor of Mathematics at Universidade de Lisboa. He received his Ph.D. at Pennsylvania State University in 1988 under the direction of Stephen Simpson. He was a Fulbright Scholar at Harvard University (Spring 2004) and Tinker Visiting Professor at Stanford University (Fall 2009). He has written papers on weak systems of arithmetic and analysis, proof theory (especially functional interpretations) and the philosophy and foundations of mathematics. He also wrote two papers on the problem of truth in Parmenides and Plato. He is a corresponding member of the Academia das Ciências de Lisboa.
Reinhard Kahle is Carl Friedrich von Weizsäcker Professor of Philosophy and History of Science at the University of Tübingen. Previously he held professorships in Mathematics at the University of Coimbra and at the Universidade Nova in Lisbon, finally becoming full professor in Mathematical Logic. He is a fellow of the Académie Internationale de Philosophie des Sciences. His main research interests are in proof theory and the history and philosophy of modern mathematical logic, in particular, of the Hilbert School. He has (co-)edited more than ten books and special issues such as, for instance, Gentzen’s Centenary: The quest for consistency (Springer, 2015) and The Legacy of Kurt Schütte (Springer, 2020), both together with Michael Rathjen.

Giovanni Sommaruga studied philosophy and philosophical and mathematical logic at the University of Freiburg (Switzerland), Stanford University and the University of Siena. In 1996 he became assistant professor in logic and philosophy of science at the Albert Ludwig University Freiburg (Germany), and since 2008 he has been a senior scientist in the philosophy of the formal sciences (logic, mathematics, theoretical computer science) at ETH Zurich. His main research interests are in the philosophy and foundations of mathematics, the history of mathematical logic, and more recently the history of computability and information in theoretical computer science, and related philosophical issues.