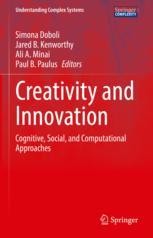 This book focuses on the emergence of creative ideas from cognitive and social dynamics. In particular, it presents data, models, and analytical methods grounded in a network dynamics approach. It has long been hypothesized that innovation arises from a recombination of older ideas and concepts, but this has been studied primarily at an abstract level. In this book, we consider the networks underlying innovation – from the brain networks supporting semantic cognition to human networks such as brainstorming groups or individuals interacting through social networks – and relate the emergence of ideas to the structure and dynamics of these networks. Methods described include experimental studies with human participants, mathematical evaluation of novelty from group brainstorming experiments, neurodynamical modeling of conceptual combination, and multi-agent modeling of collective creativity. The main distinctive features of this book are the breadth of perspectives considered, the integration of experiments with theory, and a focus on the combinatorial emergence of ideas.

Simona Doboli is Professor of Computer Science at Hofstra University. She received her PhD from the University of Cincinnati in 2001. Her research interests are in artificial intelligence, neural cognitive modeling, creativity, and computational neuroscience. Her recent work includes developing algorithms for automatic assessment of novelty in short texts, studying interactions between group and individual level creativity, and developing neural cognitive models for idea generation processes. She has 19 journal articles and over 40 conference publications. She has served as an associate editor for the journals Cognitive Systems Research and IEEE Transactions on Neural Networks. She was the Tutorials Chair for the 2019 International Joint Conference on Neural Networks (IJCNN 2019), Special Sessions Chair for IJCNN 2011, and Workshops Chair for IJCNN 2013. Her research has been funded by the U.S. National Science Foundation and the U.S. Army Research Office.

Jared B. Kenworthy is an Associate Professor of Psychology at the University of Texas at Arlington. He earned his Ph.D. in social psychology from the University of Southern California in 2002, then completed a post-doctoral fellowship at the University of Oxford (UK) from 2002 until 2005. His research interests include both intergroup relations and group processes. Within intergroup relations, his interests include understanding the predictors of religious, ethnic, and national prejudice as well as prejudice reduction. Within group processes, his interests include the predictors and consequences of ingroup identification, and group coordination, and collective creativity and innovation. His work has been funded by the U.S. National Science Foundation and the U.S. Army Research Office.

Ali A. Minai is Professor of Electrical Engineering and Computer Science, and a faculty member in the Neuroscience Graduate Program at the University of Cincinnati. He received his Ph.D. in Electrical Engineering and post-doctoral training in neuroscience at the University of Virginia. His research interests include neural networks, natural language processing, complex systems, computational models of cognition, computational neuroscience, and multi-agent systems. He is the recipient of research grants from several funding agencies, including an INSPIRE award from the U.S. National Science Foundation. Dr. Minai was President of the International Neural Network Society (INNS) in 2015-16, and has served on the Society’s Executive Committee and Board of Governors for several years. He served as the General Chair for the 2011 International Joint Conference on Neural Networks (IJCNN 2011) and the 8th and 9th International Conferences on Complex Systems (ICCS 2011, ICCS 2018), and as General Co-Chair for ICCS 2020. He is co-editor of ten books in the area of complex systems. He is an action editor for the journal Neural Networks, an associate editor of the IEEE Transactions on Neural Networks and Learning Systems, and an academic editor for the journal Complexity. Dr. Minai is a senior member of the IEEE and the International Neural Networks Society, and a member of AAAS and the Society for Neuroscience.

Paul B. Paulus received his Ph.D. from the University of Iowa and is Dean Emeritus of the College of Science at the University of Texas at Arlington. His research has focused on group processes with an emphasis on the social and cognitive process of creative collaboration. This research has been supported by a series of grants from the U.S. National Science Foundation and U.S. Army Research Office. With Bernard Nijstad he has edited two volumes on group creativity-Group Creativity: Innovation Through Collaboration (2003) and The Handbook of Group Creativity and Innovation (2019). He has served as Chair of the Department of Psychology and Dean of the College of Science and has been a visiting scholar at nine different institutions.