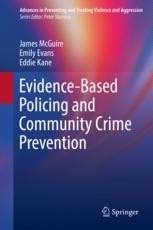 This book addresses and reviews progress in a major innovative development within police work known as evidence-based policing. It involves a significant extension and strengthening of links between research and practice and is directed to the task of increasing police effectiveness in the field of community crime prevention. This volume provides an international perspective that synthesizes recent research results from the United States and other countries – including systematic reviews of large bodies of evidence – to illuminate several of the most challenging issues currently confronting police departments. It examines recent advances in research-based models of policing and the expanding base in outcome evaluation.

Key areas of coverage include:

In addition, each chapter presents an overview of key issues within a designated area, synthesizes existing reviews, and examines the most recent research. The book clearly and concisely presents major concepts, theories, and research findings, thereby providing both conceptual and analytic tools alongside an integrated presentation of principal findings and messages. The volume concludes with a discussion of current directions in research, key developments in policing strategies, and identification of effective operational structures for facilitating and sustaining research-practice links.

James McGuire, Ph.D., is Emeritus Professor of Forensic Clinical Psychology at the University of Liverpool, where he was Director of the Doctorate in Clinical Psychology programme from 1995 to 2013. Before that, he worked in learning disability services and for six-and-a-half years in a high security hospital. He has carried out psycho-legal assessments for the Youth and Crown Court and for hearings of the Mental Health Review Tribunal, Parole Board, and Criminal Cases Review Commission. He has conducted research in probation services, youth justice, prisons, and other settings on aspects of psychosocial rehabilitation with offenders; has written or edited 15 books and more than 170 other publications on this and related issues. He is a member of the Correctional Services Advisory and Accreditation Panel, National Offender Management Service (NOMS). He has been an invited speaker at many conferences in the United Kingdom and 21 other countries and has been involved in a range of consultative work or staff training with criminal justice and social welfare agencies in the United Kingdom and 12 other countries. As part of a consortium of universities and allied agencies from 2015 to 2017, he undertook a series of systematic evidence reviews for a major research project commissioned by the College of Policing.

Emily Evans, Ph.D., is a researcher with more than 15 years of experience in the fields of criminal justice and community safety. She has worked in research roles across the public, private, and academic sectors. She is currently a Research Fellow at the University of Birmingham’s Institute for Global Innovation, the University’s home for world-leading, multidisciplinary research to address the world’s most pressing challenges. Her doctoral research was an evaluation of Integrated Offender Management, a multiagency approach to managing prolific offenders. The research was commissioned by local criminal justice agencies to help improve local operation. She has continued to research offender management with projects for the College of Policing regarding domestic violence and mental health and an evaluation of the Wales Integrated Serious and Dangerous Offender Management (WISDOM) programme.Eddie Kane, Ph.D., is Director of the Centre for Health and Justice at the Institute of Mental Health, University of Nottingham. He is currently delivering national and international research programmes for organisations including Interpol, London Violence Reduction Unit, College of Policing, Independent Office of Police Conduct and other large grant funding programmes covering the development of evidence-based interventions at the health justice interface and policy review programmes in forensic services. He continues to advise government on aspects of home affairs and High Risk Offenders. He led the University of Nottingham team that developed the National Knowledge and Understanding Framework for personality disorders. Professor Kane was previously the Department of Health’s principal adviser on Personality Disorder (PD) services in which he led the development of the national PD strategy, including the Capabilities Framework workforce and training development plan. He was the National Director of High Security Psychiatric Services. He also worked as the director of NHS performance and mental health for London and as director of mental health for the Northwest and West Midlands regions of England. He has been an NHS Trust Chief Executive and held board-level positions in various public, private, and voluntary organisations.
Show all