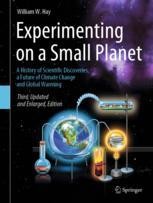 Experimenting on a Small Planet

A History of Scientific Discoveries, a Future of Climate Change and Global Warming

This book is a thorough introduction to climate science and global change. The author is a geologist who has spent much of his life investigating the climate of Earth from a time when it was warm and dinosaurs roamed the land, to today's changing climate. Bill Hay takes you on a journey to understand how the climate system works. He explores how humans are unintentionally conducting a grand uncontrolled experiment which is leading to unanticipated changes. We follow the twisting path of seemingly unrelated discoveries in physics, chemistry, biology, geology, and even mathematics to learn how they led to our present knowledge of how our planet works. He explains why the weather is becoming increasingly chaotic as our planet warms at a rate far faster than at any time in its geologic past. He speculates on possible future outcomes, and suggests that nature itself may make some unexpected course corrections. Although the book is written for the layman with little knowledge of science or mathematics, it includes information from many diverse fields to provide even those actively working in the field of climatology with a broader view of this developing drama. Experimenting on a Small Planet is a must read for anyone having more than a casual interest in global warming and climate change - one of the most important and challenging issues of our time. This new edition includes actual data from climate science into 2021. Numerous Powerpoint slides can be downloaded to allow lecturers and teachers to more effectively use the book as a basis for climate change education.

In 1982 he moved to Boulder, Colorado as Director of the University Museum, and was soon added to the faculty of Geology and CIRES. He resigned as Director of the Museum in 1987, and from 1990 to 1998 was on a half -time appointment at Colorado and half-time as Gastprofessor at GEOMAR, a marine geological research institute attached to Christian-Albrecht's-Universität, Kiel, Germany. In 1991-92 he was an Alexander von Humboldt Senior Research Scientist. In the summer of 1993 he was Gastprofessor in the Sektion Marine Geologie, Institute for Baltic Sea Research in Warnemünde, Germany, and in the fall of the same year F. C. Donders Professor at the Institute of Earth Sciences, University of Utrecht, The Netherlands. In the fall of 1995 and again in 2010 he was Gastprofessor, sponsored by the University of Vienna, in the University's Institut für Paläontologie, Vienna, Austria. During the fall of 1996 he was Gastwissenschaftler, sponsored by the Deutsche Forschungsgemeinschaft, at the Institute for Baltic Sea Research in Warnemünde/Rostock and Gastprofessor at Ernst-Moritz-Arndt University in Greifswald, Germany. During the summer and fall of 1997 he was Gastprofessor at GEOMAR, Christian-Albrecht's-University, Kiel, Germany. He retired from the University of Colorado in 1998 to take on the role of Professor of Paleoceanology full time at GEOMAR. He retired from GEOMAR in June 2002. He is Professor Emeritus at the University of Colorado, and now lives in Estes Park, Colorado. In 2018 he was awarded an Honorary Doctorate (Doktor der Naturwissenschaften Ehrenhaber) from Christian-Albrecht’s University in Kiel.

His is author or co-author of more than 260 scientific papers.

His involvement with ocean drilling goes back to the SUBMAREX (1963), where he was one of the investigators of the paleontology of the cores. He was a reviewer of the LOCO and JOIDES proposals. He served on the JOIDES Gulf Advisory Panel, from1965-74. After moving part time to the Rosenstiel School of the University of Miami he became that institution’s

He was largely responsible for establishment of JOI, Inc. (Joint Oceanographic Institutions) as the legally responsible agent for ocean drilling, clarifying the liability questions associated with JOIDES. He served on the JOI Board of Governors from 1976-80 and was its Vice Chairman from 1978-80. When the Office of Science and Technology Policy pressed exploration of an academic/industry joint venture for drilling the ocean margins with riser capabilities, he was selected to serve as Chairman of the Scientific Advisory Committee for the Ocean Margin Drilling Program from 1979-1986. To enhance the visibility of the science program he became President of JOI, and served in that capacity from 1979-1982.

He served as Chairman of a National Science Foundation - Division of Ocean Sciences Panel to Review the Ocean Drilling Program in 1988. He has also served on JOI Committees to review ODP.

In a related role, he served as Chairman of the National Academy of Sciences/National Research Council's Continental Scientific Drilling Committee from 1985-88.

In the Ocean Drilling program phase, he has served on the Advisory Panel on Sediment and Ocean History (1984-87) and the Advisory Panel on Sedimentary Geochemistry and Physical Processes from 1989-92 and again from1994-97, when he served as its Chairperson. He participated in JOI/USSAC Workshops on Scientific Drilling in the South Atlantic (1985), Scientific Drilling in the Caribbean (1986), Global Changes in Sea Level (Steering Committee, 1987-90), Ocean Chemistry (1990), and Paleogene Paleoceanography (1991). He also served on the JOIDES Scientific Advisory Structure Review Committee (1992-93), and as Chairman of a Detailed Planning Group on Antarctic Ocean Drilling in 1996. He served as the German representative on the JOIDES Scientific Committee from 1998-2001, and as its Chairman for 1999-2000. He participated in the formation of ECOD, the European Consortium for Ocean Drilling.