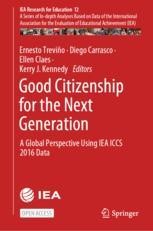 Good Citizenship for the Next Generation

This Open Access book presents an international group of scholars seeking to understand how youth from different cultures relate to modern multidimensional concepts of citizenship, and the roles that education and society have in shaping the views of the world’s future citizens. The book also explores how different aspects of citizenship, such as attitudes towards diverse population groups and concerns for social issues, relate to classical definitions of norm-based citizenship from the political sciences.

Authors from Asia, Europe, and Latin America provide a series of in-depth investigations into how concepts of “good citizenship” are shaped in different regions of the globe, using the rich comparative data from the IEA’s International Civic and Citizenship Study (ICCS) 2016. In twelve chapters, the authors review the concept of “good citizenship”; how citizenship norms adherence is configured into profiles across countries; and what country, school, and background factors are related to how students adhere to citizenship norms. Recognizing contingent social and political situations in specific regions of the world, the present books offer six chapters where authors apply their expertise to offer locally relevant and pertinent observations on how young people from diverse cultures understand and relate to different dimensions of citizenship in the countries of Asia, Europe, and Latin America.

The present book is of relevance for different audiences interested in civic education and political socialization, including social sciences and education, integrating topics from political science, sociology, political psychology, and law.

Dr Ernesto Treviño is the director of the Center for Educational Transformation, principal researcher at the Center for Educational Justice, and associate professor of the Faculty of Education at the Pontificia Universidad Católica de Chile. He is interested in understanding of educational inequalities in Chile and Latin America, and studies on the interaction between policy and practice in schools and classrooms to promote the integral development of students. Dr Treviño has directed several research projects, including the second, third, and fourth studies of factors associated with achievement for UNESCO’s Latin American Laboratory for the Assessment of the Quality of Education, as well as several studies funded by the Chilean National Council for Science and Technology and several national and international organizations.

Dr Ellen Claes is an associate professor at the faculty of Social Sciences of the KU Leuven (Belgium). She has worked at the Centre for Political Science since 2005 and has been responsible for the Masters program in Social Science Education since 2013. Dr Claes is interested in the relationships between school characteristics, citizenship education, and students’ democratic attitudes. Her research focuses on open classroom climate and the opportunities this offers to counter ethnic prejudice and increase social and political trust. She also studies the effects of different teaching styles on students’ political knowledge, interest, participation, and trust. Professor Kerry Kennedy is Professor Emeritus, Advisor (Academic Development), and Senior Research Fellow at the Centre for Governance and Citizenship at The Education University of Hong Kong. He is also a Distinguished Visiting Professor at the University of Johannesburg.  He is the Editor of Routledge’s Schools and Schooling in Asia series, the Asia Europe Education Dialogue series, the Perspectives on Education in Africa series and Springer’s Civic and Citizenship Education in the 21st Century series. He is  also co-editor of Springer’s Governance and Citizenship in Asia series. His most recent publication is Civic and citizenship education in volatile times: Preparing students for citizenship in the 21st century, published by Springer. Dr Diego Carrasco is a researcher at the Centro de Medición MIDE UC, Pontificia Universidad Católica de Chile. He investigates the methodological problems of measurement and inferential issues concerning national and international large-scale assessments, focusing on learning environments and citizenship education. Dr Carrasco is co-chair (2019-2020) of the Comparative and International Education Society’s Large-scale Cross-national Studies in Education special interest group. He helped establish the methodology for the fourth Comparative and Explanatory Study of UNESCO’s Latin American Laboratory for Assessment of the Quality of Education. He is currently a co-investigator for the "Chilean school system and the development of civic outcomes" project, researching the relationship between school environment and student endorsement of democratic attitudes, values, and beliefs.
Show all