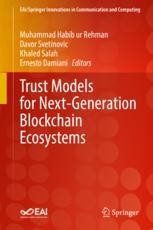 Muhammad Habib ur Rehman is currently working at center for cyber-physical systems of Khalifa University in United Arab Emirates as a postdoctoral research fellow. He is currently working on trustworthy Blockchain technologies for intelligent cyber-physical systems. His main research activities include research and development of trust models for decentralized and trustworthy artificial intelligence applications for cyber-physical systems. He is also an alumnae of DAAD’s postdoctoral network since September 2019. Habib is a bright spark fellow and he obtained his PhD degree from faculty of computer Science and information technology, University of Malaya, Malaysia. He completed his bachelors and masters degrees in Pakistan whereby he received gold medals and 100% fee-waiver scholarships from COMSATS University Islamabad, Pakistan. Overall, he has authored/co-authored 40 international publications including journal articles, conference proceedings, book chapters, and magazine articles whereby his 04 articles are categorized as highly cited publications by Web-of-Science. Dr. Habib's research interests include blockchain technologies, cyber-Physical Systems, secure key management, big data, edge computing, and industrial IoT. Dr. Habib is a professional member of IEEE.
Davor Svetinovic received the Ph.D. degree in computer science from the University of Waterloo, Canada, 2006. He is currently an Associate Professor of computer science with the Khalifa University of Science and Technology, UAE, and a Research Affiliate with the Media Lab, Massachusetts Institute of Technology (MIT), USA. Previously, he worked as a Visiting Professor at the Massachusetts Institute of Technology (MIT) and a Postdoctoral Researcher at the Lero–the Irish Software Engineering Center, Ireland, and the Vienna University of Technology, Austria. He leads the Strategic Requirements and Systems Security Group (SRSSG), and he has extensive experience working on complex multidisciplinary research projects. He has published over 80 articles in leading journals and conferences. His current research interests include systems security and privacy, blockchain engineering, and artificial intelligence. He is a Senior Member of IEEE and ACM. Khaled Salah received the B.S. degree in computer engineering with a minor in computer science from Iowa State University, USA, in 1990, the M.S. degree in computer systems engineering and the Ph.D. degree in computer science from the Illinois Institute of Technology, USA, in 1994 and 2000, respectively. He is currently a Full Professor with the Department of Electrical and Computer Engineering, Khalifa University, UAE. He joined Khalifa University, in August 2010, where he is teaching graduate and undergraduate courses in the areas of cloud computing, computer and network security, computer networks, operating systems, and performance modeling and analysis. Prior to joining Khalifa University, he worked at the Department of Information and Computer Science, King Fahd University of Petroleum and Minerals (KFUPM), Saudi Arabia, for ten years. He has over 190 publications and holds three patents, has been giving a number of international keynote speeches, invited talks, tutorials, and research seminars on the subjects of blockchain, the IoT, fog and cloud computing, and cybersecurity. He is a member of the IEEE Blockchain Education Committee. He was a recipient of the Khalifa University Outstanding Research Award, in 2014 and 2015, the KFUPM University Excellence in Research Award, in 2008 and 2009, and the KFUPM Best Research Project Award, in 2009 and 2010, and the departmental awards for Distinguished Research and Teaching in prior years. He serves on the editorial boards of many WoS-listed journals, including IET Communications, IET Networks, Elsevier’s JNCA, Wiley’s SCN, Wiley’s IJNM, J.UCS, and AJSE. He is the Track Chair of the IEEE Globecom 2018 on Cloud Computing. He is an Associate Editor of the IEEE Blockchain Newsletter. Ernesto Damiani is Senior Director of Artificial Intelligence and Intelligent Systems Institute, Khalifa University, leader of the Big Data area at Etisalat British Telecom Innovation Center, Full Professor at Università degli Studi di Milano, and President of the Consortium of Italian Computer Science Universities (CINI). Within the Computer Science Department of the Università degli Studi di Milano, he leads the Secure Service-oriented Software Research (SESAR) Lab. According to DBLP, Ernesto Damiani has authored 129 journal papers, 321 refereed articles in proceedings of international conferences, and published 56 books and chapters as an author or editor. According to Google Scholar, Ernesto’s work has been cited more than 16,600 times and his h-index is 55; 271 of his papers have at least 10 citations. On Scopus, he has 583 documents and more than 6,500 total citations by 5,200 documents. His Scopus h-index is 35. With 517 publications listed on DBLP, he is considered among the most prolific European computer scientists.Ernesto is also co-author of several industrial patents together with researchers from private companies like British Telecom and Siemens Networks (now Nokia Siemens). Among his books, most notable are “Open Source Systems Security Certifications” (with C.A. Ardagna, N. El Ioini, Springer, 2008), “Intelligent Multimedia Multi-Agent Systems: A Human-Centred Approach (with R. Khosla, I. K. Sethi, Springer, 2010)”, and “Human-Centred e-Business” (with R. Khosla and W. Grosky, Elsevier, 2003). Well-known is his work on (a) the modelling and analysis of SOA and cloud security; (b) encrypted data querying and secure computation over Big Data, and (c) semi-structured data models (he contributed to the seminal XML-GL query language, was the proposer of the XACML policy language as well as of the notion of fuzzy matching of metadata).