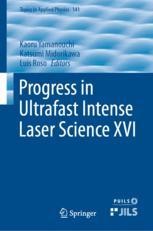 This book covers a broad range of topics from the interdisciplinary research field of ultrafast intense laser science, focusing on atoms and molecules interacting with intense laser fields, laser-induced filamentation, high-order harmonics generation, and high power lasers and their applications. This sixteenth volume features contributions from world-renowned researchers, introducing the latest reports on probing molecular chirality with intense laser fields, and the most recent developments in the Shanghai Superintense Ultrafast Laser Facility project.

The PUILS series delivers up-to-date reviews of progress in this emerging interdisciplinary research field, spanning atomic and molecular physics, molecular science, and optical science, which has been stimulated by the recent developments in ultrafast laser technologies. Each volume compiles peer-reviewed articles authored by researchers at the forefront of each of their own subfields of ultrafast intense laser science. Every chapter opens with an overview of the topics to be discussed, so that researchers unfamiliar to the subfield, especially graduate students, can grasp the importance and attractions of the research topic at hand; these are followed by reports of cutting-edge discoveries.

Kaoru Yamanouchi has been professor of chemistry at the University of Tokyo since 1997. His research fields are in physical chemistry and AMO physics, gas phase laser spectroscopy, chemical reaction dynamics, and intense laser science. In 1996 he launched a new research project to investigate how atoms, molecules, and clusters behave in an intense laser field whose magnitude is as large as that of a Coulomb field within atoms and molecules. By developing new experimental techniques such as mass-resolved momentum imaging, pulsed gas electron diffraction, and coincidence momentum imaging, he has continued a successful exploration of the new research field of ultrafast intense laser science. Among his discoveries, ultrafast structural deformation of molecules and ultrafast hydrogen atom migration within hydrocarbon molecules are particularly noteworthy. He has also demonstrated how ultrafast structural changes of molecules can be probed in real time with femtosecond temporal resolution.

Katsumi Midoridawa has been Director of the RKEN Center for Advanced Photonics since 2013. As one of the world’s leading experts of ultrafast high intensity lasers and attosecond science, he has made outstanding contributions to the generation of intense coherent extreme ultraviolet and soft x-ray (XUV) radiation by high-order harmonic generation (HHG) and its application to attosecond nonlinear processes in atoms and molecules. For his outstanding scientific achievements, he was elected as Fellow of the Optical Society of America, the American Physical Society, the IEEE Photonic Society, the Japan Society of Applied Physics and The Laser Society of Japan.

Luis Roso is the promoter of the Spanish Center for Pulsed Lasers, CLPU, at Salamanca, Spain, and its Director since 2008. He has been a full professor at the University of Salamanca since 2012. After obtaining his PhD on the topic of saturation spectroscopy in 1982, he carried out research on a Fulbright Scholarship at the University of Rochester in 1985-86, returning to Spain with a new interest in the chirped pulse amplification lasers just then discovered by Mourou and Strickland at Rochester. He led the installment of the first terawatt laser in Spain at the Laser Service of Salamanca in 2003 and published the first paper on attosecond generation by a relativistically driven moving mirror. His research interests include the generation of secondary sources of particles for industrial and medical applications. He was recently appointed as Correspondent Academician at the Royal Arts and Sciences Academy of Barcelona (RACAB).