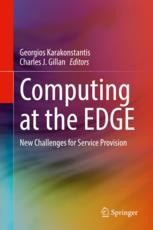 Computing at the EDGE

This book describes solutions to the problems of energy efficiency, resiliency and cyber security in the domain of Edge Computing and reports on early deployments of the technology in commercial settings.  This book takes a business focused view, relating the technological outcomes to new business opportunities made possible by the edge paradigm. Drawing on the experience of end user deploying prototype edge technology, the authors discuss applications in financial management, wireless management, and social networks. Coverage includes a chapter on the analysis of total cost of ownership, thereby enabling readers to calculate the efficiency gain for use of the technology in their business.

Dr. Georgios Karakonstantis is a senior lecturer in the School of Electronics, Electrical Engineering and Computer Science of the Queen’s University Belfast, U.K. Prior to joining Queen's, Georgios was a senior research scientist at the Swiss Federal Institute of Technology in Lausanne (EPFL), Switzerland. He received his Ph.D. degree from the Electrical and Computer Engineering department of the Purdue University, U.S.A, in 2010. In the summer of 2008, he was with the Advanced Technology Group, Qualcomm Inc., San Diego, CA, and in 2003 he worked in the VLSI lab of Intracom, Athens, Greece. He has authored over 50 papers in referred journals and conferences, a patent and a book chapter. In 2012 he was awarded a 4-year Marie-Curie Career Integration Grant by the European Commission and in 2010, his work on a quality adaptive and energy efficient camera was recognised at the International Altera Innovate Design Contest. Georgios has setup and led 5 European, Swiss and industrial funded projects as investigator on the design of energy efficient and error resilient computing systems.

Dr. Charles Gillan obtained his PhD at Queen’s University Belfast (QUB) in 1988 working on high performance computing (HPC) for electron molecule collisions at low impact energies. He then worked in the Theoretical Chemistry group at the IBM Research Division in San José, CA. On returning to the UK, Dr Gillan worked for Nortel Networks (UK) Ltd until 2004 in the embedded software group where he worked on line cards for SDH  multiplexers in a global software team.  Dr Gillan is presently a  senior lecturer in the Computing Systems group  in the School of Electronics, Electrical Engineering and Computer Science of the Queen’s University Belfast, U.K.. He has significant industrial, FP7 and H2020 management experience. He was co-ordinator of the FP7 HANDHOLD project (contract number 284456) funded under the Security Theme, a project manager on the FP7 NanoStreams project and on the H2020 UniServer project and a Work Package leader on the H2020 AllScale project. He has published fifty academic papers.
Show all