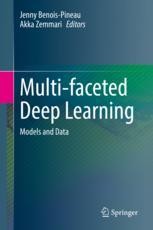 This book covers a large set of methods in the field of Artificial Intelligence - Deep Learning applied to real-world problems. The fundamentals of  the Deep Learning approach and different types of Deep Neural Networks (DNNs) are first summarized in this book, which offers  a comprehensive preamble for further  problem–oriented chapters.

The most interesting and open problems of machine learning in the framework of  Deep Learning are discussed in this book and solutions are proposed.  This book illustrates how to implement the zero-shot learning with Deep Neural Network Classifiers, which require a large amount of training data. The lack of annotated training data naturally pushes the researchers to implement low supervision algorithms. Metric learning is a long-term research but in the framework of Deep Learning approaches, it gets freshness and originality. Fine-grained classification with a low inter-class variability is a difficult problem for any classification tasks.  This book presents how it is solved, by using different modalities and attention mechanisms in 3D convolutional networks.

Prof. Jenny Benois-Pineau is a full professor of Computer Science at the University Bordeaux. Her topics of interest include image/multimedia, artificial intelligence in multimedia and healthcare. She is the author and co-author of more than 200 papers in international journals, conference proceedings, books and book chapters. She is associated editor of Eurasip SPIC, ACM MTAP, senior associated editor JEI SPIE journals. She has organized workshops and special sessions at international conferences IEEE ICIP, ACM MM,... She has served in numerous program committees in international conferences: ACM MM, ACM ICMR, ACM CIVR, CBMI, IPTA, ACM MMM. She has been coordinator or leading researcher in EU – funded and French national research projects. She is a member of IEEE TC IVMSP. She has Knight of Academic Palms grade.

Dr. Akka Zemmari has received his Ph.D. degree from the University of Bordeaux 1, France, in 2000. He is an associate professor in computer science since 2001 at University of Bordeaux, France. His research interests include Artificial Intelligence, Deep Learning, Distributed algorithms and systems, Graphs, Randomized Algorithms, and Security. He wrote one book and more than 80 research papers published in international journals and conference proceedings and he is involved in program committees and organization committees of international conferences.