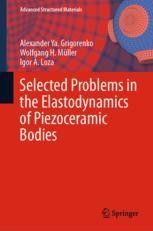 Selected Problems in the Elastodynamics of Piezoceramic Bodies

This book presents various dynamic processes in non-uniform piezoceramic cylindrical and spherical bodies based on numerical methods. It discusses different variants of nonhomogeneous structural polarized piezoceramic materials in the shape of cylinders and spheres, and highlights the validation of the reliability of the results obtained by numerical calculations. The content is based on an outlined theory and methods of three-dimensional electroelasticity problems.

Prof. Dr. Alexander Ya. Grigorenko was born in Kyiv on June 17, 1955. He graduated the cybernetics department of the Kyiv State University in 1977 with a Diploma in Applied Mathematics, has worked at the Institute of Mechanics since 1981, and has headed the department of numerical methods since 2005. He defended PhD thesis in 1980 and Dr. Sci. thesis Phys.-Math.) and in 1993, awarded the title of professor in 2001. His main achievements are in the field of solid mechanics: wave and vibration processes in elastic and electroelastic bodies, numerical analysis of stationary deformation of anisotropic inhomogeneous shells and elastic bodies, dentistry biomechanics.
Prof. Dr. Wolfgang H. Müller was born in Wiesbaden (Germany) on April 13, 1959. He graduated from the Technical University in Berlin in  with a Diploma in Physics in 1982. He defended his PhD thesis (TU Berlin) in 1986 and In 1997 he finished
his habilitation work at  the Universität Paderborn and was awarded the Venia Legendi in  Technical Mechanics. Since 2001 he is a full professor of   Continuum  Mechanics and Materials Theory at the Technical University of Berlin.
His research is based in the field of theoretical engineering and  materials science.

Prof. Dr. Igor A. Loza was born in Kyiv on August 21, 1956. He graduated  the faculty of Transport Construction of the Kyiv National Transport University in 1978, major discipline – bridge and underbridge, has worked at the Institute of Mechanics from 1981 to 1991. From 2003 works in Kyiv National Transport University. Since 2015 is head of
department of theoretical and applied mechanics. He defended PhD thesis in 1984 and Dr. Sci. thesis Phys.-Math. in
2012, awarded the title of professor in 2015. His main achievements are in the 3D theory of electroelasticity:dynamical process in electroelastic inhomogeneous bodies.