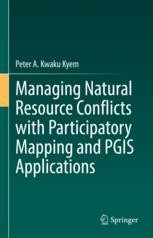 This book integrates spatial analysis into the study and management of conflicts, and offers a model in conflict studies that incorporates theoretical explanations of conflict, its causes, and impacts, with a geospatial strategy for intervening in disputes over allocation and use of natural resources (connects theory and practice). Alongside a theoretical analysis of resource conflicts and an account of Participatory Mapping and PGIS development, this book provides a case study of GIS applications in conflict mediation. The book also lays out a practical and straightforward demonstration of PGIS applications in conflict management using a real-world case study, and traces the Participatory Mapping and PGIS movements’ evolution, compares PPGIS and PGIS practices, and makes distinctions between traditional GIS applications and PGIS practice. The approach embodies the enhanced use of spatial information and media, sets of tools for analyzing, mapping, and displaying spatial data and a platform for participatory discussions that enhances consensus-building. The book, therefore, contributes to the search for novel approaches for managing current and emerging conflicts. With this book, resource managers, development practitioners, students, and scholars of Participatory Mapping and PGIS applications and conflict studies will be equipped with the principles, skills, and the tools they need to manage non-violent resource conflicts and keep the disputes from slipping into violence. The book will also be a valuable text for basic and advanced studies in Participatory Mapping and PGIS applications, Conflict Resolution and Conflict Management.

Dr. Peter Amos Kwaku Kyem has a Ph.D. in Geography (1997) from the Graduate School of Geography, Clark University, in Worcester, Massachusetts, USA. His Ph.D. research was on Participatory GIS Applications Forest Resources Management. Dr. Kyem’s educational experience spans across three continents, Africa, Europe, and North America. After receiving a Bachelor of Arts in Geography from the University of Cape Coast, at Cape Coast in his native Ghana (1982), he moved to the International Institute for Aerospace Survey and Earth Sciences, ITC, Enschede, in the Netherlands where he obtained a Post­graduate Diploma in Applied Geomorphology (1987). He then went to Carleton University, Ottawa, Canada, for his Master of Arts degree in Geography (1991) before proceeding to Clark University, Worcester, MA, the USA, for his Ph.D.

At Clark University, Dr. Kyem worked in different Research capacities at Clark Labs, which is best known for its flagship product, the IDRISI GIS and Image Processing software. He was a member of the team of researchers at Clark Labs that developed a Comprehensive Decision Support Tools in Idrisi GIS in 1993. After graduating from Clark University, Dr. Kyem went to teach at Central Connecticut State University, where he has been teaching GIS, Resource Management, and other courses in Geography since 1997.

Dr. Kyem has had a long association with the PGIS movement. Based on his Ph.D. thesis research, he was invited to a workshop on GIS and Society at Santa Barbara, CA, in 1998. The workshop, sponsored by the National Center for Geographic Information and Analysis (NCGIA), discussed issues that were central to the development of the PPGIS movement. Since then, Dr. Kyem has published several research articles and made conference presentations on Resource Conflicts and PGIS Applications. His publications on the topic for the proposed book appear in reputable peer-reviewed journals such as the Annals of the Association of American Geographers, Cartographica, Transactions in GIS, Applied Geographic Studies, and the Journal of Planning Education.