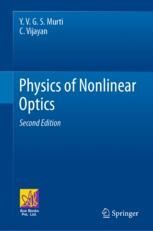 The book is designed to serve as a textbook for courses offered to upper-undergraduate students enrolled in physics. The first edition of this book was published in 2014. As there is a demand for the next edition, it is quite natural to take note of the several advances that have occurred in the subject over the past five years and to decide which of these are appropriate for inclusion at the textbook level, given the fundamental nature and the significance of the subject area. This is the prime motivation for bringing out a revised second edition. Among the newer mechanisms and materials, the book introduces the super-continuum generation, which arises from an excellent interplay of the various mechanisms of optical nonlinearity. The topics covered in this book are quantum mechanics of nonlinear interaction of matter and radiation, formalism and phenomenology of nonlinear wave mixing processes, optical phase conjugation and applications, self-focusing and self-phase modulation and their role in pulse modification, nonlinear absorption mechanisms, and optical limiting applications, photonic switching and bi-stability, and physical mechanisms leading to a nonlinear response in a variety of materials. This book has emerged from an attempt to address the requirement of presenting the subject at the college level. This textbook includes rigorous features such as the elucidation of relevant basic principles of physics; a clear exposition of the ideas involved at an appropriate level; coverage of the physical mechanisms of non-linearity; updates on physical mechanisms and emerging photonic materials and emphasis on the experimental study of nonlinear interactions. The detailed coverage and pedagogical tools make this an ideal textbook for students and researchers enrolled in physics and related courses.

Y.V.G.S. Murti is a former professor of Physics at the Indian Institute of Technology Madras and Guwahati, India. His principal domains are physics research, teaching, and technology applications of physics. Prof. Murti’s research areas are condensed matter, ionic transport phenomena, nonlinear optics and photonics, theoretical simulation of thermodynamics of point imperfections in crystalline materials, and classical and modern optics of materials. He established a school of research on photonics where he experimented on nonlinear wave mixing as well as on the theoretical evaluation of optical nonlinearities of color centers.

C. Vijayan has done his M.Sc. and Ph.D. in physics from the Indian Institute of Technology Madras, Chennai, India. His early work includes solid-state transport phenomena and photonic memories. For the last two decades, he has been actively researching on nonlinear optical properties of novel materials. As a physics professor at the Indian Institute of Technology, Madras, he heads the photonics laboratory directing work on quantum confined materials and novel nanophotonic materials, including the ultrafast response of random media and two-dimensional structures. He has authored over 100 scientific papers in journals of repute. He is currently collaborating with several international research groups in the broad area of light-matter interaction.