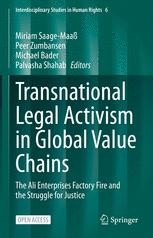 The Ali Enterprises Factory Fire and the Struggle for Justice

This open access book documents and analyses the various interventions – legal, political, and even artistic – that followed the Ali Enterprises factory fire in Karachi, Pakistan, in 2012. It illuminates the different substantive and procedural aspects of the legal proceedings and negotiations between the various local and transnational actors implicated in the Ali Enterprises fire, as well as the legal and policy reforms sparked by the incident. This endeavour serves to embed these legal cases and reform efforts in the larger context of human and labour rights protection and global value chain governance. It also offers a concrete case study relevant for ongoing debates around the role of transnational approaches in making human rights litigation, advocacy, and law reform more effective. In this regard, the book interrogates and critically reflects on such legal campaigns and local and transnational reform work with a view to future transformative legal and social activism.

Miriam Saage-Maaß is a lawyer and vice legal director at ECCHR, where she also leads the Business and Human Rights program. She worked on various cases against corporations, including civil litigation against German retailers regarding to labor exploitation in South Asia, as well as criminal proceedings against high-ranking managers for their involvement in international crimes. Saage-Maaß regularly publishes academic articles on corporate accountability for human rights violations in global supply chains and is an internationally renowned expert for corporate responsibility and human rights.

Peer Zumbansen is a private law scholar with a focus on contract law, corporate governance and transnational regulatory theory. In January 2021, he joined McGill University Faculty of Law in Montreal, Canada, as the inaugural holder of the professorship of business law. From 2004 to 2020, he held a research chair and professorship at Osgoode Hall Law School in Toronto, Canada, where he founded and directed the Critical Research Laboratory in Law & Society, and the Collaborative Urban Research Laboratory and launched the SSRN e-journal for the Comparative Research in Law & Political Economy Network.

Michael Bader studied law at Humboldt University in Berlin, Germany, and holds a Master of Laws (LLM) in Law, Development and Globalisation from SOAS, University of London. He cofounded the Refugee Law Clinic Leipzig and is an editor of Völkerrechtsblog. After a traineeship in 2017, Bader joined the European Center for Constitutional and Human Rights in September 2019 as a Research Fellow in the Business and Human Rights programme with a focus on corporate exploitation in global supply chains. Since September 2020, he has been supporting ECCHR’s Institute for Legal Intervention as a Bertha Justice Fellow.

Palvasha Shahab was the joint executive director of the Rasheed Razvi Centre for Constitutional and Human Rights, and the Legal Aid Foundation for Victims of Rape and Sexual Assault through September 2020. She now works a consultant for RCCHR, LAFRSA, the Legal Aid Society and the Pakistan Institute for Labour Education and Research. She is on the Law Committee of the Sindh Commission of the Status on Women and advises on upcoming legislation. She is also an advisor to a transnational collaborative project on oral histories and social interventions titled “Karachi Beach Radio.” She also teaches undergraduate courses on peace movements and international human rights law at SZABIST, Karachi. Shahab further curates and moderates important public discussions on national platforms such as the Adab Fest and The Second Floor. She holds a Master of Laws from Columbia Law School, New York, US, where she was also a Human Rights Fellow at the Human Rights Institute in 2017-18.