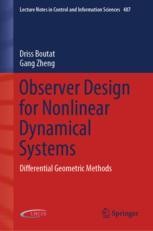 This book presents a differential geometric method for designing nonlinear observers for multiple types of nonlinear systems, including single and multiple outputs, fully and partially observable systems, and regular and singular dynamical systems. It is an exposition of achievements in nonlinear observer normal forms.

The book begins by discussing linear systems, introducing the concept of observability and observer design, and then explains the difficulty of those problems for nonlinear systems. After providing foundational information on the differential geometric method, the text shows how to use the method to address observer design problems. It presents methods for a variety of systems. The authors employ worked examples to illustrate the ideas presented.

Observer Design for Nonlinear Dynamical Systems will be of interest to researchers, graduate students, and industrial professionals working with control of mechanical and dynamical systems.

Professor Driss Boutat received his Ph.D. degree in Differential Geometry from University of Claude Bernard, Lyon I, France, in 1993. From 1995 to 1997, he co-founded the National School of Engineers of Bourges (ENSIB) specializing in industrial risk management. From 1997 to 2002, he was a mathematics teacher at ENSIB, before becoming Associate Professor and earning the Accreditation to Supervise Research (HDR) in 2007. Since 2008, he is Full Professor at ENSIB, which developed into the INSA Centre Val de Loire in 2014. From 2011 to 2017, Professor Boutat was the leader of the Control Team in the PRISME Laboratory. Since then, he is the head of the observer and estimation team in PRISME Laboratory. Professor Boutat is an internationally recognized expert on control and observer design. The main focus of his research interests is the development of observers for nonlinear dynamical systems, distributed parameter systems, and fractional-order systems. In these topics, he has published about 60 international journal articles and 90 international conference articles. Moreover, he is supervisor of 17 PhD students (11 have defended). Thanks to his work, he earned the Order of Academic Palms Chevalier (Knight) in January 2010, the national award for doctoral supervision and research from 2008 to 2012, and the national award for scientific excellence since 2012. In 2011, he was selected in Who's Who in the World. Moreover, he was associate editor of Journal of Nonlinear Dynamics, member of the editorial board of Discrete Dynamics in Nature and Society, and member of the editorial advisory board of Mediterranean Journal of Measurement and Control. Professor Boutat has been appointed as Foreign Expert in the "Thousand Talents to High-Level Project" by the Chinese State Administration of Foreign Experts Affairs in 2017 for 3 years, and as High Level Foreign Expert by the Ministry of Science and Technology of China Affairs in 2020 for 3 years. From 2019 to 2021, he has been nominated as Guest Professor by Shenyang Jianzhu University. Currently, Driss Boutat is the Director of Bourges's Campus, the Deputy Director of “Mathematics, Computer Science, Theoretical Physics and Systems Engineering" Doctoral School (MIPTIS DS) and the Director of the program MORA and INSA Group (7 institute of Engineer schools) SAST (Scholarship for Applied Science & Technology).

Dr. Gang Zheng received his Ph.D. degree in automatic control from the University of Cergy-Pontoise (France) in 2006. Since 2007, he has held several postdoctoral positions at Inria Grenoble, at LJK/CNRS and at ENSEA. He is currently a full-time scientific researcher of Inria Lille. He obtained the habilitation of research (HDR) from the University of Science and Technology of Lille in 2015.  He has held several Visiting Professor positions at Zhejiang University in 2013, at Wuhan University in 2014, and at Nanjing University of Science and Technology since 2015. His research interests include control and observation of nonlinear dynamical systems, and its application to robotics. He is a senior member of IEEE, and has co-authored more than 150 publications in his area of research.