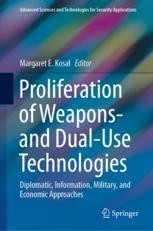 Proliferation of Weapons- and Dual-Use Technologies

This book explores and analyzes the rapid pace of technological evolution in diplomatic, information, military, and economic sectors, which has contributed to a dynamic international policy environment. Global political stability is greatly influenced by innovations originating from numerous sources, including university labs, the technology sector, and military research. Collectively, these innovations guide the movement of people, ideas, and technology that in turn affect the international balance of power. The objective of this volume is to develop new insights into how the proliferation of innovative ideas, low-cost weapons, and dual-use technologies impact the changing global security landscape. Innovative and dual-use technologies can be used for beneficial purposes or defensive purposes. Alternatively they may be appropriated or employed for nefarious purposes by hostile military powers and non-state actors alike. Such actions can threaten global security and stability. As the complexity of technological innovations continues to increase, existing control mechanisms such as international regulations and security arrangements may be insufficient to stem the tide of proliferation over time. As such, this works seeks to assess and present policy solutions to curtail the threat to global stability posed by the proliferation of weapons and dual-use technology.

Dr. Margaret E. Kosal is committed to actively bridging the scholarly policy divide through cutting-edge research relevant to the policy arena. Kosal is Associate Professor in the Sam Nunn School of International Affairs at Georgia Institute of Technology, where she is Director of the Sam Nunn Security Program and the Program on Emerging Technology and Security. She was recently appointed faculty in the Parker H. Petit Institute for Bioengineering and Bioscience at Georgia Tech. Her research explores the relationships among technology, strategy, and governance. She focuses on two, often intersecting, areas: reducing the threat of weapons of mass destruction (WMD) and understanding the geopolitics of emerging technologies. She is the author of Nanotechnology for Chemical and Biological Defense, which explores scenarios, benefits, and potential proliferation threats of nanotechnology and other emerging sciences, and editor of the two previous volumes, Technology and the Intelligence Community: Challenges and Advances for the 21st Century, and editor and contributor to the volumes Disruptive and Game Changing Technologies in Modern Warfare: Development, Use, and Proliferation. Formally trained as an experimental scientist, Kosal earned a doctoral degree in Chemistry from the University of Illinois at Urbana-Champaign (UIUC) working on biomimetic and nano-structured functional materials. She is also the co-founder of a sensor company, where she led research and development of medical, biological, chemical sensors and explosives detection.

She has lectured widely internationally, including invited briefs to the Organisation for the Prohibition Chemical Weapons (OPCW) in The Hague, the United Nations Interregional Crime and Justice Research Institute (UNICRI), and the United Nations Office for Disarmament Affairs (UNODA). Internationally, she has advised the OPCW on emerging technologies. In spring 2010, the PI was the only US academic selected to participate in a series of United Nations meetings aimed to scan the horizon for developments and assess risks and responses in the technology fields of synthetic biology and nanobiotechnology. Kosal was nominated to and led the US involvement in the NATO Nanotechnology for Defense Working Group. She is the recipient of multiple awards including the Office of the Secretary of Defense Award for Excellence and honored as Georgia Power Professor of Excellence in Fall 2017. In January 2017, she was appointed Editor-in-Chief of the Cambridge University Press journal, Politics and the Life Sciences.